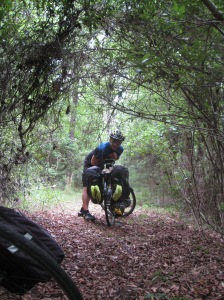 Emerging from our camp site in the afternoon

Dallas and I intended to leave our campsite early, but it was almost noon when I woke up.  Dallas is going to have to start being more forceful when trying to wake me up, I guess.  I sleep like a rock.

We packed up and made our way back onto the route to Charleston shortly after noon.  There was absolutely nowhere to stop until about 23 miles in, where we pulled into a gas station to refill our water bottles, use the restroom and eat lunch.  After devouring almost an entire package of Ritz crackers with two small cans of salmon, a bag of peanut m&m’s, an oatmeal raisin cookie and a Snickers ice-cream bar, we got back on our bikes for another 16 miles before stopping for one last snack break at a school.

Tiny frog along one of the trails we rode down

The roads today were diverse.  When we weren’t on the busy main road, we were on back roads that were mostly unpaved and ranged from packed dirt to grass to sand to gravel.  One road involved crossing under a few gates and passing a No Trespassing sign, and then hopping over another gate on the other end.  While the unpaved roads slowed us down a lot, riding on them was superior to riding amongst the fast-moving weekend traffic.

Our warm showers host, Charles, lives on Charlestowne Road in Charleston.  He greeted us outside when we arrived and told us to make ourselves at home.  After showering, we went downstairs and Charles showed us around the city.  We had some tasty Korean food for dinner, and Dallas and I walked from the house to TCBY for frozen yogurt after we returned from our tour.

Posted on 20 May 2012, in Bicycle Touring, New Orleans to Newport. Bookmark the permalink. Leave a comment.