I almost kitten-napped this little guy from Tata’s house.

Lenin and I left Tata’s place just after breakfast, reriding the last several kilometers back into Turbo to collect our helmets, which we had forgotten at Tata’s market. The ride out of Turbo was uneventful aside from a flat tire and a short stop to eat fruit at a finca along the road. We stopped again for fresh juice just outside of Necocli, in El Totumo. I didn’t think it was possible, but there were still fruits I hadn’t ever heard of that Colombians eat or use to make juice, and I tried two more of them at that fruit stand.

Just on the outskirts of the town of Necocli is Hacienda la Virgen del Cobre, an estate that belongs to Antonio Ocampo, one of the most infamous Colombian drug lords and business partner of Pablo Escobar. Lenin led me onto this property and alerted the family living in the house that we were going to check out the volcano. He had been here twice before, and he knew the manager, so dropping his name got us through the gate with no problem. We pulled our bikes into one of the corrals of the horse stables and unloaded our bags, tucking them into a corner where they would not be visible from outside. Then we continued by bicycle down a dirt road, which quickly became too muddy to bike on. We decided to abandon the bikes for the moment, locking them to a chain link fence under a tree just off the main path. The road was even difficult to walk on – it was a soft, peanut buttery mud that had been trampled over by numerous herds of cattle. The parts that were dry enough to walk on without sinking were hard and crusty and very uneven from the hoofprints. We walked barefoot because our flipflops were getting stuck in the mud, but I somehow had the misfortune of either stepping on all the sharp thorny things or sinking into the deepest mud while Lenin skillfully avoided every obstacle. 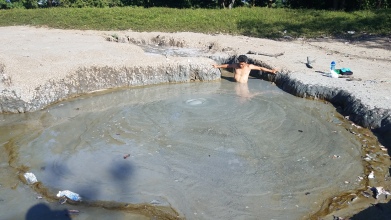 This thing was bubbling constantly. Inviting, isn’t it?

Eventually we did make it to the volcano, which resembled a small pit of filthy, boiling concrete. I thought Lenin was out of his mind if he expected us to put our bodies in that thing. I stood there, watching, as Lenin undressed and slowly lowered himself into the mud. Seriously? I could see garbage floating among the dried leaves on the edge of the pit, and it smelled like sulfur. I didn’t care what healing properties it supposedly had. I could not imagine touching the mud, let alone immersing myself in it. Somehow, Lenin coerced me into joining him. The mud was much denser and cooler than it appeared, and it was difficult to get my legs to sink. I didn’t want to let my legs sink. Every little bit of debris, which Lenin assured me was nothing more than dried leaves, creeped me out. I had trouble relaxing, while Lenin was having the time of his life, rolling around, smearing mud all over his face and posing for selfies. This place was totally isolated, and we didn’t see a single person while we were out there. There was also no fresh water to rinse off after climbing out of the volcano. We had to walk back along the muddy trail, covered in thick grey mud.

The cows line up to stare at us. No manners, these creatures have.

On our way back, I felt all of the cows were watching us. They lined up in groups, just staring at us as we walked. It was great fun to scare them all at once and watch them simultaneously take off running. When we reached our bikes, the two bags that we hadn’t bothered to leave in the stables had been opened, and it was clear that someone had rifled through everything. Nothing appeared to have been missing, except for our phone chargers, which we later discovered we had left at Tata’s house. We made it back to the stables and used a hose to rinse off and wash our clothes before heading into Necocli to find a place to spend the night.

Sunset on the beach in Necocli.

We headed straight for the beach in Necocli and watched the sun set into the sea before going into the main town square to eat. While we were in the plaza, a bohemian guy selling handcrafted jewelry off his bicycle approached us and invited us to come pitch our hammocks in the place where he was staying with another bike traveler. We followed him to what looked like an open air restaurant, situated directly across from the beach. It was quiet and dark, and it offered a roof over our heads while we slept. Both bike travelers were Colombian, and one of them claimed to know the owner of the restaurant who let them stay there. The guy who was already in his hammock was suspiciously friendly and kept repeating to us how welcome we were, but Lenin assured me that he was just drunk. The other guy soon went back into town to continue selling his jewelry, and we fell asleep.