← A Day in Savannah
Beaufort to Charleston, SC →

I didn’t wake up on Friday until after 11.  While Dallas showered, I ran over to the laundry facilities on the opposite side of the apartment complex to retrieve our laundry from the dryer.  After doing so, I jumped in the pool and swam a few laps before jogging back with our laundry.

Blaine kindly offered to drive us a bit outside of Savannah and into South Carolina so we could get away from the city and have a good start.  We gladly accepted.  Since none of us had eaten yet, I asked Blaine if he wanted to join us for breakfast first, and he suggested we eat in Beaufort, the town where Dallas and I figured we’d spend the night.  If Blaine didn’t mind driving us that far, we weren’t going to complain.  Had we not had a job waiting for us in Newport, we would have enjoyed the bike ride from Savannah to Beaufort, but since we were on a timeline we were more than willing to take rides where we could get them.

Blaine, Dallas and me at Nippy’s in Beaufort

Beaufort is a charming town, complete with its own horse and buggy tours, plenty of good restaurants to choose from, and a picturesque waterfront.  We ate at Nippy’s, which has excellent onion rings, fish and chips, fish tacos and shrimp.  After lunch, we walked to the waterfront and had ice-cream.

Blaine said goodbye to Dallas and me in Beaufort.  Before leaving the town ourselves, we got coffee from Common Ground, where we sat on their porch and contacted our next host in Charleston on WarmShowers.  One last stop before leaving town was Piggly Wiggly for some groceries to hold us over until we reached the next town, which may not be for another 70 miles. 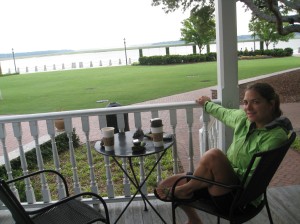 Coffee from the porch of Common Ground

We didn’t get to go very far before the sun started setting, so Dallas and I camped out only 16 miles from where we left in Beaufort.  Thanks to Blaine, we were already a bit farther than we had anticipated getting that day, so now we only have a 56-mile ride instead of 72 miles to Charleston.

Posted on 18 May 2012, in Bicycle Touring, New Orleans to Newport. Bookmark the permalink. Leave a comment.

← A Day in Savannah
Beaufort to Charleston, SC →