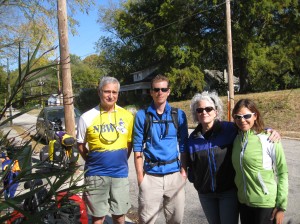 Ray, Phil, Annette and me before leaving Louisburg

The distance from Louisburg to where we were staying in Raleigh was only 38 miles, so we left much later than usual, knowing that our host would not be home until after 6pm.  Liz had already left for work, so it was just her parents (and Archie, the Jack Russel Terrier) to see us off.  Ray biked with us for the first 3 miles, until the end of the Louisburg bike path.

After we had biked about 20 miles, we stopped at a Food Lion grocery store in Wake Forest to eat, and then bike the rest of the way to Brian’s house.  Brian was at a wedding reception and had hidden a key for us to let ourselves in.  We were greeted by his friendly pit-bull mix, Valentine, who stood by, wagging her tail, while we brought our bikes and all of our gear into the kitchen.

After showering and relaxing for a bit, Brian came home and we all had a drink.  Then, we drove to Natty Greene’s, a microbrewery to where the wedding reception had moved.  Phil and I ate dinner and had some beer there before we moved on to the Oxford pub, where they were celebrating Guy Faulkes night in the street, with fire, masks, live music, outdoor drinking and hula-hooping.  Another local couchsurfer, Steve, joined us there, and we all walked over to Sitti, where Liz was still waitressing. 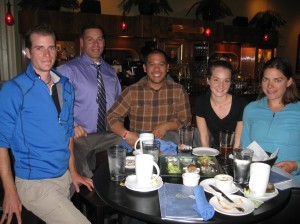 Phil, Brian, Steve, Liz and Me at Sitti in Raleigh

Back in the Lebanese restaurant, we were all too full to order anything but tea (except for Steve, who had beer).  Liz surprised us with a complimentary appetizer plate though, and of course I couldn’t resist digging into all the delicious food.

Completely stuffed, we departed the restaurant, said good-bye to Steve, and headed back to Brian’s house, where we watched a short documentary called Asiemut, made by a French Canadian couple who bicycled through Mongolia, China, Tibet, Nepal and India.  By the end of this, Brian’s roommate, Tom, and his black Lab, Jeb, had come home, and we were all about ready to fall asleep.

Posted on 6 November 2011, in Bicycle Touring, Providence to New Orleans. Bookmark the permalink. Leave a comment.