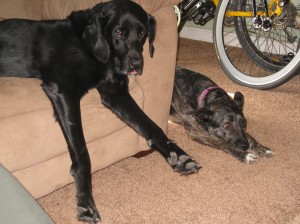 Jeb and Valentine, in Raleigh

Me, Tom, Brian and Phil, before leaving Raleigh

We had another lazy morning.  Brian and Tom took us out to a pub where their running club was having brunch after the marathon.  Yes, there was a marathon in Raleigh that morning!  Our host in Sanford, John, had actually run the marathon too (and did quite well despite being sick and not getting any sleep the night before).  I had thought about running the half marathon, but abandoned the idea when I learned that it started at 7am.  We all biked to and from brunch, and then Phil and I packed up and said good-bye.

The day was warmer than it has been in weeks.  After 17 miles or so, we came to a charming town called Apex.  We stopped because I spotted a bike shop, and we wanted to buy more tubes, but it was closed.  A group of people sitting outside at the restaurant next door started chatting with us, and told us that the bike shop guy is somehow connected to the ice-cream shop down the street.  My ears perked up at that, and we thanked them before pedaling a few doors down to the ice-cream shop.  The girl inside confirmed that the bike shop was closed, but that didn’t really matter to me anymore, as long as there was ice-cream.

We continued on for another 20 miles before stopping for a quick snack.  I ate my leftover salad from the night before, and Phil ate one of the cookies we had smuggled out from he brunch buffet.  Making good time along old route 1, we arrived in Sanford before dark.  John and his two dogs, Riley and Finnegan, were outside to greet us.  We brought our bikes inside and showered, and John made dinner.  Being a medic, John generously shared some of his supplies with Phil so he could update his medic kit.  He also outfitted my bike with an army green bag for the handlebars, which I had been wanting in order to keep my camera and phone more accessible while riding.

After dinner, Phil and I got busy online, finding places to stay in other cities along the way, mapping out the course for the following two days, and writing a few sponsorship proposals.  We are still looking for sponsors, although haven’t put a whole lot of effort into actively seeking it.  If any of our readers have suggestions for sponsors or would like to sponsor us, comment below, or contact us by e-mail!  Also, if you haven’t already done so, sign up to follow our blog by clicking the “follow” button on the right side of this page!  That will show our potential sponsors that we have an audience, and the more people who are following us will increase our chances of receiving support.

Posted on 6 November 2011, in Bicycle Touring, Providence to New Orleans. Bookmark the permalink. Leave a comment.