Closing our PeopleForBikes Season and Looking Ahead

While we’ve taken a hiatus from writing to our NomadicCycling blog, we have been busy traveling, writing and posting to social media for PeopleForBikes. In case you didn’t follow our blogs for PeopleForBikes, you can find most of them at the following links (there were two that didn’t make the cut to get published):

We had the experience of a lifetime traveling around the country in the name of bicycle advocacy, and we feel honored to have been able to work on making a difference in the political climate for cycling in the United States. There were definitely some places that were discouraging, but the majority of people we talked to were supportive of bicycling and wanted to see more bike infrastructure in their cities. While living out of a car for six and a half months was definitely stressful on our relationship, we would do it again in a heartbeat if offered the opportunity.

The best part about our short job was getting to network and meet so many people in the bicycling world. Not only did we get to make some awesome new friends, but we were able to visit old friends and family all over the country that we hadn’t seen in months, or years. We visited over 70 bike shops, mostly on the eastern half of the US, and really felt that we were able to connect with some of them to improve cycling conditions for them locally.

The second best part about the job is that we got new mountain bikes from Giant/Liv, and we got to take them to some of the best trails in each of the states that we drove through! We didn’t get to do quite as much riding as we wanted to, but we did get to go to places that we never would have otherwise. Now that we’ve surrendered our car, we’re not sure we’ll get to use the mountain bikes that much, sadly.

Since our contract ended at the end of October, Dallas and I are taking some time off to relax and make up for all the long days we spent on the road with no down time. I’m trying to focus on the remainder of the cyclocross season, and we’re both hoping to go somewhere warm (South America?) for the winter. In the meantime, Dallas is in Portland and I am in Providence until further notice! Also, follow us on instagram for photos! (I’m too lazy to include any in this post right now) 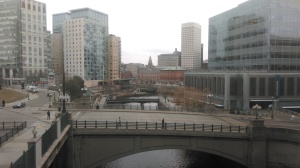 Dreary Providence at the cusp of winter and spring

Dallas and I have persevered through the worst of winter in New England, while apparently the rest of the country has had the warmest winter on record.  It’s probably the worst timing for us to be leaving, when we should be reaping the reward of spring and summer after having suffered through such misery for the past 3-4 months.  Summertime is really the only reason to ever live in Rhode Island.  I’m sad that I won’t get to experience it to it’s fullest in the Ocean State, but we have a pretty good reason for leaving now. 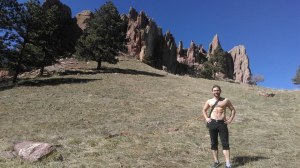 Hiking in sunny Boulder, where it’s warm enough to go topless, after our job interview

We applied as a team for a job with PeopleForBikes, a non-profit based in Boulder, Colorado, whose mission is to increase cycling (and cycling infrastructure) in the US five-fold by 2025.  This is a seasonal job, and the ultimate opportunity for Dallas and I to play an active role in bicycle advocacy while remaining nomadic and (hopefully) still cycling every day.  The job is sponsored by Volkswagen, so we will be getting a brand new car to travel around the country to various events, setting up our tent and giving out prizes to people who sign on to our movement.  We are very excited to be starting this new chapter of our lives, but at the same time very sad to be leaving Providence so suddenly.  We will be back.

Multi-use paths are everywhere in Boulder!

Dallas and I are going to be the East Coast Crew – they are still looking for the ideal candidates for a West Coast Crew, so if you’re ready to drop everything and travel around the western half of the US for the next 6 months, you can apply here!  Part of our job involves blogging and posting to instagram – so if you’d like to follow us on our PeopleForBikes journey, the blogs will be posted here, and you can follow PeopleForBikes on instagram (and if you don’t already, follow nomadiccycling on instagram too!).  And, after reading all of this, if you haven’t already joined the movement, you can sign up here!

Posted in Rhode Island, The space between