Cycling in the City vs. Nature: A Collaborative Article

While I love the way cycling through a bustling city gives me a rush of adrenaline, heightening my awareness of my surroundings, since going to Alaska I have been gravitating towards a different kind of cycling.  A fellow blogger pointed out that there are many ways to enjoy exercise, and we agreed to collaborate on a post to highlight the differences.  Whether you live in a city or in the middle of nowhere, exercise is a necessary outlet for most people, and it can be enjoyed at both extremes. 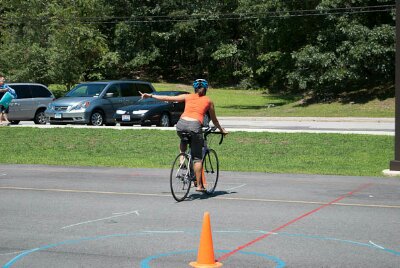 Teaching kids how to ride safely on city roads

When I lived in Montreal, I would regularly go running.  I trained for and ran my first marathon in Montreal, and most of those miles were on busy city streets.  City running (and cycling) is my favorite way to learn a new city, or get even more familiar with a city you’ve lived in for years.  As I steadily increased the distance of my long runs in Montreal, I familiarized myself with more streets and parks than I ever knew existed during my first 3 years of living there.  However, something can be said for escaping the city and getting out into nature.

In Alaska, nature was more accessible to me than ever before, and my love for trail running and mountain biking grew stronger.  Fortunately, many cities have huge parks where you can run, safe from traffic – I have utilized many of these parks in various cities where I’ve lived or visited.  If it weren’t for the noises of the city, you might actually believe that you were far from civilization while you lose yourself on their trails.  In between our bike tours, stopping for a few weeks or months at a time allows us to explore and find some of our favorite ways to stay in shape while we’re not touring.

It may seem like bicycling from place to place every day is plenty of exercise, but if it weren’t for these in between times, I’m pretty sure I would be ten pounds heavier.  We’re actually pretty energy efficient when touring, and our bodies quickly adapt to cycling 50-60 miles daily.  These miles become predictable to our muscles and are rather slow – the miles are more of a mental challenge than a physical one after the first week or so of touring.  The mental fatigue from the long hours on a bicycle prevents us from doing much of anything at the end of each day on the road, and we probably end of eating more calories than we burn.  Variation is needed – whether it’s a different sport or just a different style of riding – so we don’t plateau and lose fitness.  I like to run on my days off from cycling – but city commuting or mountain biking (without 40 additional pounds of gear) is a great way to mix it up. 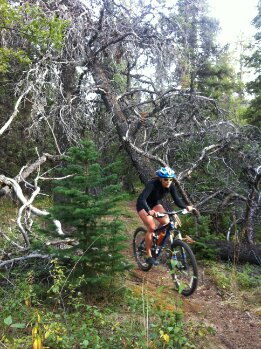 At opposite ends of the spectrum, both city cycling and mountain biking are totally different from touring.  I was surprised by how many different muscles, including upper body, that I used when I was mountain biking in Alaska.  It was so different – so fun and challenging, and something I wish I could do more frequently.  Likewise, city commuting really conditions your legs to accelerating from a stop after every stop sign and light (which can be quite frequent).  I also enjoy the challenge of racing up hills and having my own secret races against other commuters who have no idea (or maybe are racing me in their minds).  And then there’s trail running.  Trail running is like playing Tetris with your feet.  You have to figure out where to plant them before they hit the ground, and there are plenty of obstacles to make that challenging on your ankles.  Each type of exercise comes with its own mental game, and the variation really helps me to not burn out.

While some people are able to go to the gym and run on a treadmill every day, I know I could never do that.  Here in Durango, it has been incredibly cold and snowy, but I would still prefer to bundle up and go snowshoeing or ice skating outside than to concede to the gym. I will make exceptions for swimming, and I have been going to use the pool, but if it were warm enough I would choose to swim in a lake or ocean any day.  The problem with winter sports for me is the cost, but many people around here ski or snowboard during the winter and there are enough professional athletes living in the area to either motivate or depress me (I haven’t decided yet). Read Bridget’s perspective, below, on exercise and cycling from a totally different city.

It’s amazing what some of us will do to get our exercise. I used to spend almost all my free time at the gym. After work, I’d head there and stay most of the evening before going home. I didn’t exactly enjoy spending so much time in that cramped space with sweaty people running nowhere like so many hamsters in a cage. Like many others, I simply hadn’t found a better way to stay fit. Sure, I knew that some folks ran outside and others would cycle around town on errands, but those options seemed unsafe. Then I moved, and my life and habits changed radically.

A move to Las Vegas seems an unlikely catalyst for becoming an outdoor enthusiast, but that’s exactly what my move became for me. Although I originally thought that outdoor exercise in Sin City likely entailed too much to drink and a faltering march along the strip, I found out that many outdoor activities lay waiting for those willing to participate here.

If you’ve seen pictures of the Las Vegas strip lit up in all its promotional glory, you may tend to forget that the city lies in the heart of the Mojave Desert. This natural landscape features miles of bike trails, and I love taking rides through the area. Of course, getting lost here would be a travesty, so I use this handy resource to help me keep my bearings. 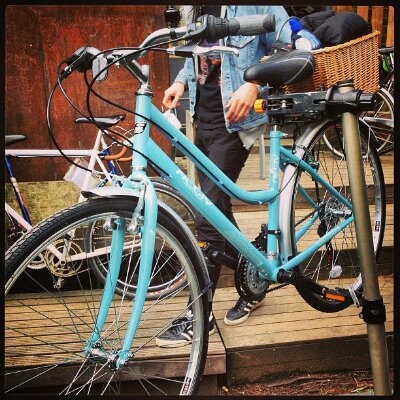 I also enjoy cycling in urbanized areas near my home. Las Vegas earned the designation of one of America’s Cycle-Friendly Cities from the League of American Bicyclists. In part, this has to do with the 390 miles of bike lanes located in the city. Downtown, several new bike racks and lockers have also been installed for the convenience of cyclists.

Travelers also benefit from the culture of fitness here. Hotels in Las Vegas offer a myriad of fitness amenities. In addition to well-equipped gyms, many local accommodations provide exercise sessions and outdoor fitness recommendations to guests. In order to find activities and accommodations that suit your personal fitness needs, use that link to filter pretty much every establishment in Las Vegas based on your travel and fitness preferences.

You don’t have to be a fitness nut to know that exercise is only one aspect of a healthy lifestyle. The fitness culture in Las Vegas has also given rise to a number of healthy eating and drinking establishments. Vegetarian fare isn’t hard to find, and several restaurants offer healthy menu options that accommodate those on the paleo diet or similar healthy food plans. If you find a juice bar more appealing than a tavern, you’ll easily find several from which to choose here in Vegas. I hope you have a chance to visit my city soon and experience all this for yourself.

Posted in The space between 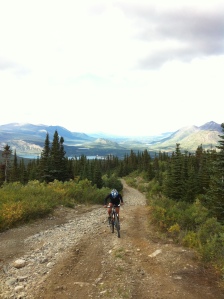 Dallas and I decided to extend our stay in Skagway by two weeks, so we could run in the Klondike Road Relay, take advantage of an extra pay period, and of course spend a little more time with the wonderful friends we made while living there.  Working as a bike guide could be terrifying at times – trusting cruise ship vacationers to navigate themselves down the White Pass on mountain bikes may be less physically demanding, but is much more stressful than pulling people around in a pedicab.  If I work as a bike guide again, I hope the clientele are limited to experienced cyclists who are physically and mentally prepared to do multi-day bicycle touring.  Still, this job was a worthwhile and enjoyable experience.

I have never lived with such close access to trails where I could lose myself in nature so easily.  Just a 5 minute walk from home could take me to the Dewey Lake trail system, where there are miles of hiking trails.  We were also just a 65 mile drive (or bike ride) from Carcross, in the Yukon, where it is always sunny and there are numerous mountain biking trails on Montana Mountain. 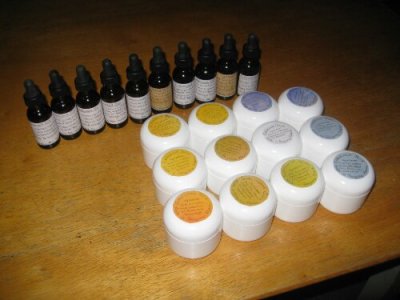 From what we were able to forage locally, we made things like dandelion salad, fireweed syrup, blueberry crisp, cranberry-poppy seed muffins, rose water (which I used to make baklava), and cottonwood oil/salve.  I only wish I could have finished bottling the cottonwood oil and salve before the last farmer’s market.  Cottonwood oil has medicinal properties and can be used as an anti-inflammatory, analgesic, and anti-microbial.  As a massage oil, it can be used to ease sore muscles or joints, and it can also be used to heal chapped or scraped skin.  If anyone would like to buy one, I will send you a 1oz bottle of oil for $12 or 2oz jar of salve for $15 – just e-mail me or leave a comment on this post.

Looking back at our time in Skagway, both of us are very glad that we decided to spend our summer there.  We were able to make great new friends, occupy our free time with a variety of outdoor activities including hiking, running and mountain biking, and we learned so much about the environment and history of the area.  Hopefully our friendships will continue far beyond this summer, and we will be able to carry what we learned to whatever awaits us in our next adventure. 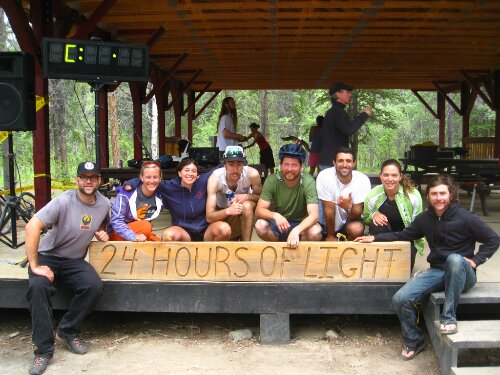 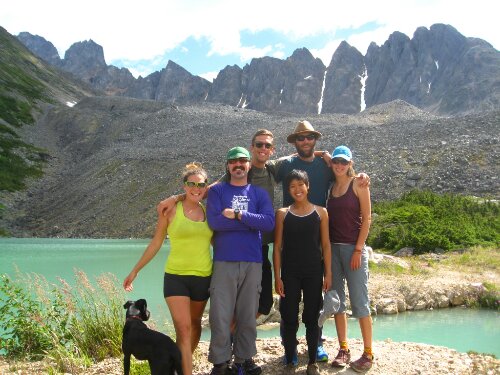 Me, Scott, Ryan, Dillon, Kristin and Zabeth climbed up to Goat Lake on the no-ship day in July

Posted in Alaska, Races, The space between