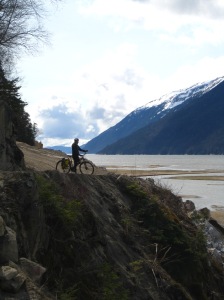 riding back from camping in Dyea

Training started on May 1st, and for the first week or so, all of us learned an incredible amount about Skagway, Coastal Temperate Rainforests, local flora and fauna, and glaciers, among other things.  When we weren’t actively training to be bicycle tour guides, we were participating in other activities aimed at welcoming and orienting us for our first summer in Skagway.  We went camping in Dyea, a town that began as a small summer fishing camp for the local Tlingits, boomed to about 20,000 people at the height of the gold rush, and then became a ghost town shortly after completion of construction of the railroad from Skagway to Dawson City.  We hiked some of the Chilkoot Trail and rafted down the Taiya river with another tour company.  We went on a bike ride through the Northwest sliver of British Columbia and into the Yukon Territory to Carcross.  We were given an exam with 30 questions to answer in detail and return a week later.  When possible, we ran and explored some of the nearby trails in an attempt to train for the upcoming Skagway Marathon.  Most of the trails were still too icy or covered with snow.  Dallas and I had very little time to relax, and practically no time to write or talk to friends and family back home.

Me, Zabeth, Kristina, Kelly and Kyle cycling into the Yukon Territory

Training has finally ceased, and all of us new guides have been slowly easing into the routine.  Cruise ships are starting to dock regularly at one of the three docks.  One amazing thing about this is that Skagway sits right at the end of the Lynn Canal, which is the deepest and longest fjord in North America.  The mountains around here, which reach heights of 7000 feet, rise right up from the sea, and the 1800ft deep canal allows cruise ships to pull right up to the docks.  In Newport, cruise ships would anchor in the middle of the bay and people would be shuttled to the shore on small boats called tenders.  At the peak of tourism season, we will be getting 4-6 cruise ships in town daily, with fewer on the weekends.  The town, which only has about 800 residents year-round and 2000 during the summer, increases 10-fold during the day while all the cruise ship tourists are walking about.  While Dallas and I have mixed feelings about them, these cruise ships are vital to Skagway’s economy. 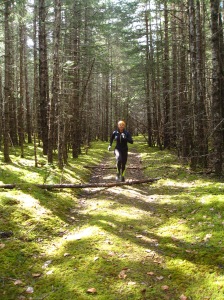 One great thing about living here is the amount of outdoor activities and available hiking trails just out our back door.  The local backcountry outfitter’s store has a summer trail challenge, and I’m excited to hike or run all 12 of the trails on the list.  The most challenging will be the historic Chilkoot Trail, which in its entirety is 33 miles long and climbs 3500 feet in elevation.  It was once a Tlingit trading route, where natives would hike to trade their fish (Hooligan) oils with the Tagish natives of the interior for furs to stay warm and red cedar to build kayaks.  When gold was found outside of Dawson City in 1896, people flocked to Dyea to hike this same trail.  The trail ends at Lake Bennett, where people would then have to build a boat to float another 500 miles up the Yukon River to where the gold was found.

hiking along the Chilkoot Trail with (top to bottom) Holly, Kelly, Zabeth, Dallas, Kristina and Kyle

Another great thing about this region is the air quality.  Lichens grow in abundance here, which is a true testament to the cleanliness of the air since they receive their nutrients from the air and are so sensitive to air pollution.  Also, bicycling is a very common form of transportation, probably because the town is only 5 blocks wide and 22 blocks long.  For a school that has only 60-70 people (k-12), there are more bike racks than the train station in Providence.  This certainly helps the air quality.  Today, while driving up to the summit for the start of one of our tours, we passed a group of high school students from White Horse, who were cycling back.  They were in the midst of a 15 mile uphill stretch along the Klondike Highway that climbs to 3292ft in elevation from sea level.  I was impressed (and a little jealous). 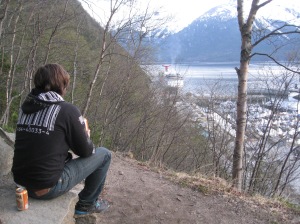 from a trail high above, Dallas watches the departure of a cruise ship

The only negative thing I can say about living in SE Alaska is that because we are so isolated, our food is expensive.  Once a week, a barge comes in with all of the town’s supplies for the week.  Groceries are not only expensive, but by the end of the week there is really not much to choose from.  Dallas and I ordered some dry goods from Amazon, but produce and dairy are tough to come by without a high cost.  Because of shipping costs, pretty much everything is pricier by at least 25 cents per pound.  I’m looking forward to June and July, when we start getting more edible plants in the forest.  Since learning about all of these berries, mushrooms, spruce tips and other edibles, my roommates and I plan to forage as much as possible in the upcoming months.

Posted in Alaska, The space between