It was raining when we were getting ready to leave Mocoa, so we waited a bit for it to let up. On our way out, we came to a public botanical garden, so we left our bikes with the security guard while hiking along a trail through the jungle.

Mochileros, or Gulungos, build these nests that hang from trees like backpacks.

Mocoa is very warm and humid, full of tropical flora and fauna. We saw toucans as well as other birds, known by the locals as mochileros, or backpackers, because the nests that they build look like bags hanging from the trees. We came to a river and decided to let the duckling swim around in a pool of water near the river. I took a few steps towards the water, and suddenly my legs sank into the sand. I was buried up to my knees! I managed to climb out, but I lost one of my flip flops below the sand. Lenin supervised the duck while I dug into the sand in a desperate search for my sandal, mentally preparing myself for the possibility of walking back on the trail barefoot. I eventually gave up and walked to the river to clean my arms, which were now covered in mud. When I walked back to where Lenin was, he had excavated my flip flop as if it were no big deal. It started to rain again on our way back to the road, so we waited with the security guard while it poured outside. Not wanting to be stuck in a room with this guy for too long, we made a break for it when it lightened up enough.

Riding through wet weather on our way out of Mocoa

We rode in this drizzle until the Fin Del Mundo, a waterfall that everyone told us we had to see if we go to Mocoa. Near the entrance to the trail for this waterfall, we rolled our bikes into a covered parking area attached to someone’s house and sat talking with the family there while the rain grew heavier. We decided not to go to the waterfall because it was cold, and we didn’t want to pay to see a waterfall when it was too cold and rainy to swim in it.

The rain eventually lightened up again, and we got back on our bikes to leave Mocoa. We stopped in the town of Villa Garzón for lunch and debated whether to just stay in a hotel that night because of all the rain. The hotel was dirt cheap (only $10,000 pesos) because they didn’t have a television, but by the time we finished eating, the rain was gone, and it looked like it wasn’t coming back. 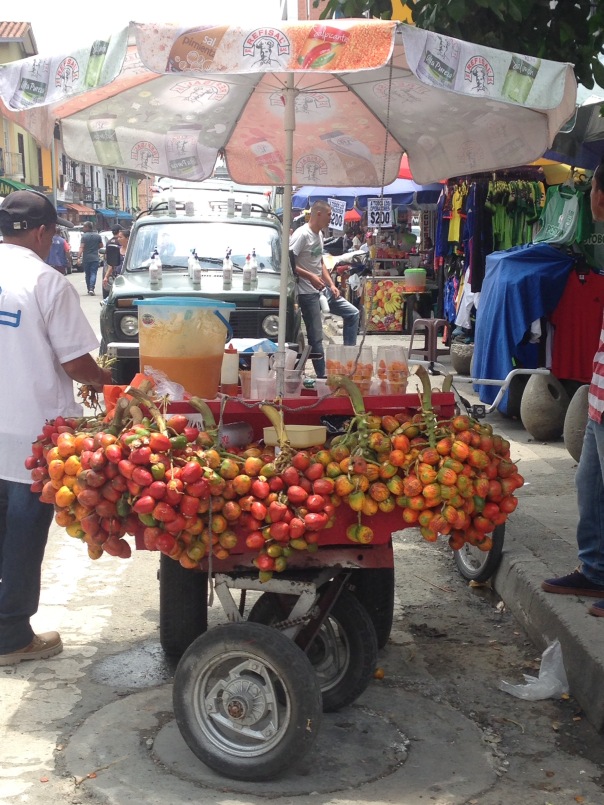 Chontaduros are commonly sold on the streets or of carts, like this one in Medellín.

We made one more stop in San Pedro to snack on chontaduros, a fruit that grows on a tree similar to coconut, but is smaller, orange, and its taste and texture somewhat resembles pumpkin. I first saw this fruit in Neiva, where there are many people selling them in carts on the street. It’s widely available in the warmer climates of Colombia and popular among the black communities. People eat it with salt or honey, and also as a juice with milk or a creamy soup. I definitely preferred it with honey, but my taste is always partial to sweet over salty.

Our ride was mostly flat or downhill, and we remained in a warm, tropical climate the whole way to Puerto Asís. We made it to the town just after sunset, and just before our WarmShowers host, Monica, would be free to meet us in the main square.

Posted in Colombia and Ecuador, New Orleans to Newport

Comments Off on Mocoa to Puerto Asís