← Bogotá
The crash between Fusa and Giradot →

Lenin swaps rides with a local pedicabber for a short distance on our way out of Bogota.

​When we finally left Bogotá, it took about two hours just to get out of the city limits. Along the way, we passed a neighborhood that was full of pedicabs, and Lenin talked one of the drivers into switching with him for a short distance. The man agreed, and Lenin pedaled his cab, full of passengers, to the next corner while the driver wobbled a bit on Lenin’s loaded bike before catching up to ride alongside the cab.

Once we made it out of the city, we started climbing again, and it felt especially difficult after not having biked very hard the past week. The last 20 or so kilometers were downhill, and only interrupted by one quick stop to fix a flat tire on Churro’s trailer. When we arrived in Fusagasuga, or Fusa, Lenin asked for directions to try to find his friend’s motorcycle shop. However, on the way up one of the main roads, his friend, Hugo, recognized him and called out to us from the place where he was eating lunch with his son, Felipe. 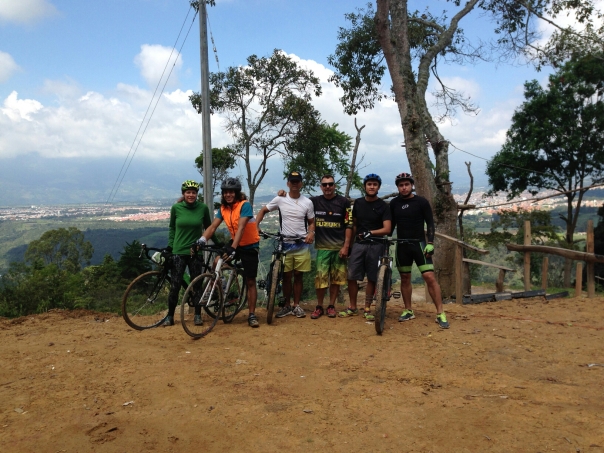 ​In Fusa, Hugo and Felipe took us on a bike ride up to where they were building a finca. The road was more suitable for mountain bikes, but I managed to make it to the top on my road bike without any trouble until the last few meters down the driveway. I slipped in the mud, recovered, and the next pedal stroke threw my derailleur into the spokes of the rear wheel. The derailleur hanger instantly snapped, so I was forced to rig the bike up as a single speed for the ride down.

I was so terrible at this game, they let me take a few steps closer to throw the stone.

​
On the way down the mountain, we stopped to play a game called teho, which is a lot like cornhole except you throw heavy stones at a clay surface that is rigged with explosives. You get points if you explode one of the explosives, but you get more points if the stone lands in the middle of the ring. The most points you can get is when you explode one of the explosives and then that same stone ends up landing in the middle. I was pretty terrible at the game, but it was still fun. People commonly play this game while drinking beers, often going through entire cases of beer by the end. The team who loses has to pay for everything. By no fault of my own, my team ended up winning, so I did not have to pay.

We ended up staying a day longer than planned in Fusa, spending a considerable amount of time looking for the right derailleur hanger to fix my bike. Ultimately, we decided to leave it single speed until we got to a bigger city and could find the part.

← Bogotá
The crash between Fusa and Giradot →