On the way out of Moniquira, we slowly made our way uphill for about an hour before we came across the finca that the tourist policeman had recommend to us the night before. We only had to go about 65 km to get to our friend’s house in Tunja, but there was a lot of climbing, and Churro in his trailer slowed us down considerably. 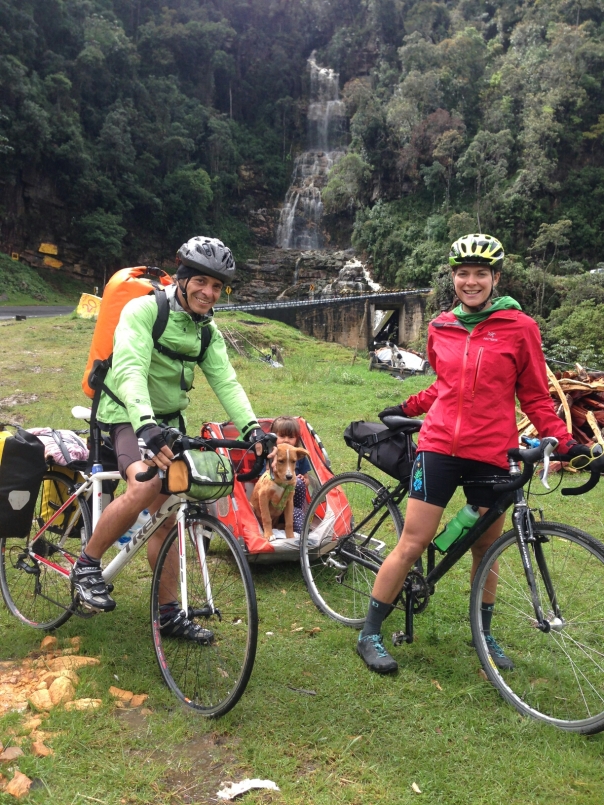 With the waterfall where we stopped to wait out the rain in the background, a little girl from the family that lived there joins Churro in the trailer for a photo

​We finally started to descend a steep mountain when it began raining. The rain was cold and hard, and the on the way down we passed a magnificent waterfall. Shortly after this, and the only place for miles where one could pull over, was a house that happened to have an amazing view of the cascade. Lenin and I were not the only ones stopping here, as there was another couple on a motorcycle who had also come in to stay dry. The family inside seemed accustomed to frequent visitors, and they made coffee for all of us while Lenin and I changed into dry clothes. Lenin asked them why they don’t have a restaurant or some business there, with the perfect view of the waterfall, but the woman answered that there are too many thieves from Bogotá on the road. After waiting for about an hour, the rain let up enough for us to venture back outside. We continued on to a small town called Arcabuco, where we stopped for lunch. We got inside just a moment before the rain recommenced, this time for longer and harder than the first time.

​The rest of the ride to Tunja was uneventful, until we reached Combita, just 15 kilometers from our destination. The home where Nairo Quintana grew up is on our route, and it has become somewhat of a shrine to the superstar athlete. Nairo’s parents run a small tienda out of the house, selling mugs, shirts, souvenirs, coffee and other snacks. I had been anticipating arriving at this place all day, and it seemed to take forever to get there. The road was hilly, and weather was pretty horrible for cycling, and nobody seemed to know anything about distances or how long it would take to bike somewhere. Seriously, every time we asked someone how far the house was, they severely underestimated either the distance or the time it would take. Anyway, it was dark by the time we arrived at Nairo’s house in Combita, and all I wanted to do was rest inside and recharge. We had already wasted a lot of time waiting for rain to stop, and Lenin wanted to get on the road quickly to get to Tunja.
After a quick tinto (black coffee) and brief conversation with Nairo’s mom, we got back on our bikes. It was dark and cold, and from there it was all downhill, so we were going fast with not much pedaling, making me even colder. My front light died almost instantly, so I couldn’t see the cracks in the road. Within the first few kilometers after leaving Nairo’s house, I got a flat tire. I felt like giving up and hitchhiking right then, but we sat on the side of the road in the dark, fixing the flat with frozen fingers. From there, the descent was steeper and the pavement grittier and less consistent.

When we arrived in Tunja, Edna was still driving back home from out of town, so we sat at a cafe to pass the time. Two guys came up to us and bought us coffee, actually! They had seen us in Moniquira that morning and wanted to talk to us about our trip. One of them, Juan Manuel, was an enthusiastic cyclist who wanted to show us around the city, so he and Lenin exchanged phone numbers. When we finally met Edna and walked to her house, it was a relief to have a nice place to rest for a few days.