Fighting ALS for our friend Bobby

When I first started this website, I wanted to use it to raise money for charity as well as awareness about bicycle transportation and bike advocacy. Since I hate to ask for money, I haven’t been very good at raising it. However, right now our good friend, Bobby Forster, really needs our help. He was diagnosed with ALS just last Christmas, and what started last year as some weakness in one of his arms has progressed way too rapidly to almost total paralysis. It is painful to see our friend, who just a few months ago was riding bikes with his friends and driving pedicabs, in such a helpless state. He has had to buy a special wheelchair, a wheelchair-accessible van to get around, and hire a full-time caretaker. He also has a feeding tube and will eventually need a tracheotomy. Since he obviously can no longer work, Bobby and his family need as much support as they can get to keep living and fighting this horrible disease. If you can spare anything (even as little as $5), please donate to his fund here. 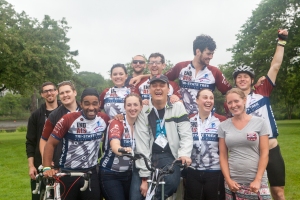 Always smiling, Bobby (in the Sox cap) is surrounded by amazing friends who participated in ALS-TDI’s Tri-State Trek bike tour this summer to raise money for ALS research.

I met Bobby when I became a pedicab driver in Newport, and I worked with him again in New Orleans. He is one of the most positive, welcoming and friendliest people I know, and he’s the main reason why I ended up pedicabbing in New Orleans. I can’t picture Bobby without having a smile on his face. He’s also an incredibly active person, into sailing as well as cycling, so I can only imagine how difficult it is to have his ability to stay so active taken away like this. You can read his story and find out more about ALS through that link, and you can also read Bobby’s updates to his own blog at www.acureforforster.com.

One last thing – If you want to directly fund research for finding a cure for ALS, you can simply text “ALS” to 80077, and you will magically donate $10 to ALS-TDI, an organization that has been working tirelessly since 1999 to search for a cure or treatment.