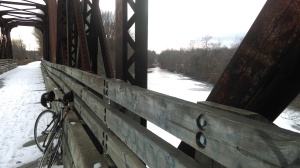 Before the first big snow storm, when the bike path was still somewhat easy to ride on

So many people have been shocked and maybe impressed that Dallas and I are riding our bikes through the winter.  At least once a day someone tells me, “I can’t believe you’re still riding in this!”  Well, to be honest, I would much rather ride my bike in this snow than drive a car.  Don’t get me wrong.  Cycling in the winter has its own drawbacks and discomforts, but I feel I have no right to complain about the choice I made not to have a car, even in the worst of winter conditions.  I have no regrets and am happier than ever to ride my bike instead of drive.  Here’s a few reasons why. 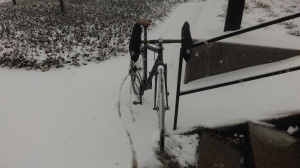 Riding in the snow can be peaceful and fun, before it gets salted and all serenity is destroyed by filthy traffic

I am still getting outside and incorporating activity into my daily commute (and sometimes for fun as well, although we have both been heavier on the yoga and other indoor forms of exercise these past few months) – as long as I’m dressed appropriately, I feel much better than I would if I were sitting in a car (and in the crawling traffic jams that seem to be everywhere during snowy rush hours).  From the moment I step outside I am moving, keeping my body warm.  The snow adds a bit of a balance challenge, and the cars sliding around add a danger factor (how exciting).  I have to ride my bike differently in the winter, watching out for snow and ice and taking my turns cautiously.  I may have to change my course to avoid hills or roads that present hazards I would rather not deal with.  I have a little more trouble looking over my shoulder for cars because I have to turn half my body around to see beyond my hood, which I have pulled up over my helmet.  I adapt to these challenges, and I even enjoy them for a time.  I feel more confidence on my bike as I learn how to improve my balance on these challenging surfaces. 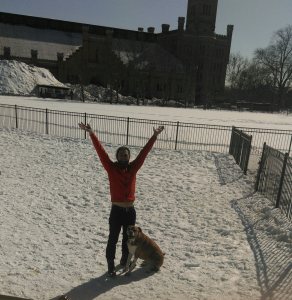 Embrace winter and have fun in the snow!

Driving a car in this weather actually seems like hell.  There is no room on the roads for cars to pass each other on many of the side streets, because the snow is stacked so high along the sides of the roads.  The sidewalks are so inconsistently cleared that pedestrians are forced to walk in the street, creating yet more obstacles for drivers.  Cyclists are forced to ride in the middle of the road, if there ever was a bike lane, because all the snow is in the parking lane and cars are parking in the bike lanes.  Where there are parked cars, they stick out, adding to the difficulty of navigation.  Why drive when you end up sitting in a line of traffic, catching the same red light for 3 or 4 (or more) cycles before you finally arrive at the intersection?  Why drive when there’s nowhere for you to park your car?  What are you supposed to do when you finally do arrive are your destination and there’s a parking ban because of the snow?  It’s more work to have a car in the winter than it is to bike, in my opinion.  If you’re not spending hours shoveling your car out of your driveway, you’re spending money for someone else to do it for you.  Unless you keep your car in a heated garage, you spend the first 10 minutes of your trip just sitting there freezing, waiting for the heat to kick in.

Skiing in the park near our house – look at all that snow!

The one thing I could live without are cars.  And salt on the road.  I know the salt makes the roads less slippery, but it really destroys my bike.  If you are riding in the winter, make sure you clean off the salt to prevent corrosion on your bike.  It’s not an easy task.  If it weren’t for cars, the roads probably wouldn’t get salted.  I wouldn’t have to worry about them slipping on ice and sliding into me, or driving way too close because the roads are half as wide as they normally are.  I wouldn’t have to turn around so far to look behind me before making a left turn because there would be no cars to plow me down from behind.

You can see from the photo that locking up a bike becomes a little…different, in the winter.

As I mentioned, cycling does have its own drawbacks and discomforts during the winter season.  But I believe they are far outweighed by the positives.  The worst part about winter cycling (besides having to watch out for scary cars) is that my body can never seem to distribute heat evenly.  My hands and feet and face are most vulnerable, while the rest of my body will be overheating.  Maybe I just haven’t figured out the right gear – and this changes daily depending on the outside conditions.

These Bar Mitts have been the best Christmas present – before, I used to have to stop mid-ride to warm up my hands on the way to work.

My dad gave me a set of Bar Mitts for Christmas, which have been a lifesaver (or hand saver).  They keep the wind off my hands and I’m able to wear lighter gloves, but depending on the temperature, but hands will still freeze with heavy winter cycling gloves inside the Bar Mitts, or they will be sweating profusely along with the rest of my body, while my feet are still solid ice cubes.  This is a personal problem, and everyone needs to experiment with different layers in different conditions to determine what works for their own body.  I’m afraid I’m just doomed to have perpetually cold feet (even in the summer).  A face mask can help keep the cold wind off my face, but then my glasses usually fog up if I breathe.  These are problems I can deal with temporarily, but they do require that I bring a dry change of clothes with me wherever I’m going.  I still think it’s better than driving.  All that said, I am ready for winter to be over!