A Mysterious Email and the Case of the Stolen Bike

As some of you might remember, Sarah and I had our bikes stolen while we were in Portland, OR back in April of 2013. They were locked together with one lock on a bike rack outside of REI. It was a quick in-and-out mission at REI, yet it was apparently long enough for somebody to cut our lock and get away with both our bikes. Needless to say, we were heartbroken. 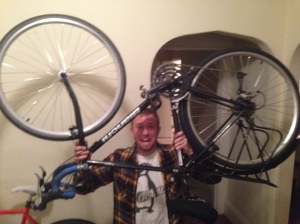 My good friend Brandon in PDX, crazy excited about the bicycle recovery!

Amazingly, after a year and a half of separation from our bicycles, we have some partial closure…I GOT MY BIKE BACK! I’d like to share with you now the story of how bikeindex.org, a random email, some close friends and the Clackamas County Sheriff all helped in the recovery process. Sorry if it’s a little lengthy, but I was really excited to share as many of the details as I could!

The morning of September 30, 2014 started out like any other morning. I was a little groggy, made some breakfast and sipped some coffee as I went through my inbox. Only on this day, there was a strange message in my inbox from bikeindex.org with “Stolen notification email” in the subject line. My first reaction was that it was probably some sort of spam and that I should be wary of opening it, and maybe even just delete it. After going through all my other messages I came back to it and wondered what to do. The truth is that I didn’t know what bikeindex.org was. I had posted my stolen bike info to a website called stolenbikeregistry.com, but a quick internet search indicated that stolenbikeregistry.com had merged with bikeindex.org earlier that year. I decided the message was worth a look. Lo and behold it seemed to be a legit message from a stranger, basically saying that if I hadn’t recovered my bike yet there was one for sale on Portland’s craigslist that bears some similarities to the one I posted. Keep in mind that almost 18 months had gone by, and I had pretty much written off any recovery of my bicycle.

Obviously it was a long shot but I did a quick search and found the craigslist post in question, and my first thoughts were that even if the bike were mine I couldn’t prove it being that I was physically in Providence, RI. Although it was the same size, color and model of my old frame there were some differences. The bar tape was a different color, there was no front rack, it looked like a different saddle and there were no recognizable decals/stickers. Despite this, I copied the grainy picture from craigslist and blew it up so I could compare it with other pictures of my bike I had saved on my hard drive. There were indeed some similarities. The wheels looked the same, despite missing their decals. There was residue where a decal had been on the wheels in the same shape mine had, and the proximity of those decals to the valve stems were the same. The rear rack looked exactly the same from what I could tell. I questioned whether I was just looking for similarities or if I was actually seeing them. It took a couple hours, but I had eventually convinced myself that there was enough to go on to make it worth investigating further. There was still the small problem of being in Providence, RI while the bike was for sale in Portland, OR! 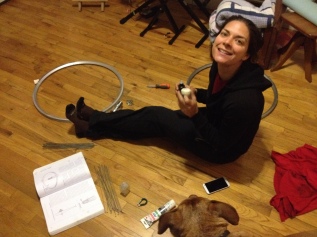 Sarah and Maní building a new rear wheel for me. When we received the bike in Providence we realized the rim had been destroyed.

I sent a group text out to my best friends in Portland explaining the situation and asked if anybody would take a closer look. Almost immediately I received several responses from my friends saying things like “we’re going to get your bike back!” and “this guy’s going down!”. I was trying to keep a level head about it and just needed further proof that it was indeed my bicycle…I mean, nothing had been proven yet. I told my friends about a few things that would help identify it. For one, the wheels were unique. The front hub was a Phil Wood and the rear hub was a White Industries. I also mentioned some things like how I had to drill holes in the rear fender so I could zip-tie it to the rack. My friends took note of everything I was saying and told me that they would take it from there. I couldn’t ask for better amigos.

My friends contacted the seller and they agreed to meet with him after work. The seller suggested meeting, of all places, directly across the street from where the bike had been stolen! Despite trying to keep a level head, I really started getting my hopes up as I looked at all the coincidences. My friends also contacted the Clackamas County Sheriff’s office (which is where I filed the report) and the sheriff agreed to meet with them. The whole thing was unfolding into a kind of sting operation, and I was watching it come into fruition from across the country! I just hoped it was indeed my bike and that I wasn’t wasting anybody’s time.

The meeting went down like this: The sheriff was supposed to meet my friends before they met with the seller. The sheriff would be strategically parked around the corner from the meeting place. If my friends got a positive ID on the bike they would text the sheriff and he would drive over and they would take my bike home. Things didn’t work out quite that smoothly. The sheriff had been busy with higher priority things leading up to the meeting, so he was nowhere to be found. My friends met with the seller at the planned time and they were able to identify the bike right away, but had to stall before the sheriff would arrive. I guess they argued with the seller that this was their friend’s bike, but the seller denied everything. Finally, the sheriff shows up. My friends point out all the identifiable pieces that make it my bike, but there’s a problem…the serial number on the police report can’t be found anywhere! They search high and low all over the bike frame and can’t find it. The closest that they come are finding 3 digits sticking out from under a cable guard that match the last three digits of the serial number on file. The sheriff says that without the full serial number, there is no positive way to identify the bike. Things were looking grim.

Reunited at last! Happily riding my recovered bike through Providence.

While all this is happening, I’m getting a play-by-play via text messages. Eventually I get a call from one of my friends saying that the sheriff won’t let them take the bike without seeing the full serial number. They asked if I knew where it was, but I couldn’t remember. They knew that if they let the craigslist seller take the bike home, they would never see it again. My heart sank. They assured me they would do what they could to take the bike home, but things weren’t looking good.

At that point I stopped receiving text updates from them. I think maybe 30 minutes went by without any communication, but it felt like hours. The suspense was killing me! I finally received a call from my friends. The sheriff had seen the obvious conviction in my friends faces and agreed to let them take the bike home, under the stipulation that they had to find that serial number within 24 hours or else give the bike back. Luckily, as soon as they brought it home they got a screwdriver and removed the cable guard and found the rest of the hidden serial number. I was so relieved! I was going to get my bike back! I couldn’t believe it! Less than half of stolen bikes are ever recovered by law enforcement, and only about 5% are ever actually returned to their owners! I feel extremely blessed. Christmas was coming early this year!

Now, there’s still the question about Sarah’s bike. If this guy had my bike, there’s a good chance he had Sarah’s too. Sadly, that remains a mystery. Sarah didn’t have record of the serial number on her bicycle so although she filed a report, it was more or less meaningless without a serial number to match the bike to. I think that’s the biggest lesson I got from all this. No matter how many specific points of identification you can make on a stolen bike, the only thing that matters is what is in the police report, specifically the serial number. I urge anybody who has read this to please, record your serial number. It’s usually located on the bottom bracket of the frame. It’s easy enough to snap a picture of it with your phone and file it away on a computer or in an email. I would have never gotten my bike back if I didn’t have a record of the serial number somewhere. Although the chances are slim, we still hold out some hope that we will find Sarah’s bike.

My bike and friends, as it looks today, with new grip tape, decals, rear wheel and lights.

Many thanks to bikeindex.org, the vigilant stranger that sent me a message, craigslist, my amazing friends in Portland (Gerrit, Jayson, Brandon, Alyssa, Michaelangelo and Travis) and the sincere efforts from Deputy Brown of the Clackamas Country Sheriff’s Office. If you would like to help support bikeindex.org, here’s a link on how to do that: https://bikeindex.org/news/want-to-support-the-bike-index-heres-how

One last thing – here’s a good overview about bicycle theft if you’d like to learn more about what you can do to protect your bicycle: http://www.bicyclelaw.com/p.cfm/bicycle-safety/about-bike-theft

Posted on 15 December 2014, in Rhode Island, Stolen Bikes, The space between. Bookmark the permalink. Leave a comment.