← Day 14 – Gallaway to Doran Regional Park
A review of trustedhousesitters.com – from a sitter’s perspective →

Trying to be good travelers

What happened on Dallas’s last day of riding before he reached San Francisco remains a mystery for now, as I have given him ample time to update us and cannot wait any longer to update our readers on where we are and what we’re doing now!  Not that it’s very exciting.  We have paused our bicycle touring again to spend time with family in the bay area and to figure out our next move.  We have been considering a variety of options, which I wasn’t going to reveal until we made a final decision, but maybe writing it all out and sharing the possibilities with everyone will help us come to a conclusion in a more timely manner.  So, here they are:

Option 1: Go sailing!
We have been fortunate enough to meet up with David, a sailor who owns a hand built 40 foot catamaran sailboat and is looking for crew for some segments of his sail around the world.  He is very much like us in that he has been traveling and working random jobs wherever he stops, literally going wherever the wind blows him.  We started talking to him via e-mail after the website, findacrew.net, matched our profiles.  He was in Alaska for the summer, but never made it far enough north to see us while we were in Skagway.  We finally caught up to him in San Francisco where he is anchored while working on replacing the hatches, and we had the chance to go sailing with him around San Francisco Bay last week.  I have to admit that sailing across the ocean would be my number one choice, since I started my journey two years ago with the hopes of combining bicycling and sailing, and still I have yet to actually sail anywhere.  However, the boat is a work in progress, and David has not done an ocean crossing yet.  I have no doubt that he is taking all the appropriate safety precautions and am confident in his sailing ability as a captain, but we are still not ready to trust our lives to a small sailboat that is untested on such a long journey.  If David decides to head south first, to San Diego, before going west, we do want to join him.  Hopefully we will know more about his plans by the end of November.

Option 2: Bike South
We can always hop back on our bikes, but it’s going to get a lot colder before it starts getting warmer.  It only makes sense to go south.  We could bike to San Diego, and potentially crew on a sailboat from there, or keep biking south.  There are a completely different set of risks associated with this plan, but we would get to work on our Spanish.  Dallas was hoping to have saved up some more money before getting into South America, since it may be hard to find legitimate work outside of the US.  If we do go this route, we could spend the next year or two bicycling around South America. 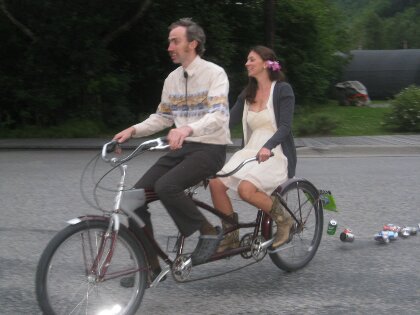 Option 3: Work seasonally in Durango, CO
Out friends, Anna and Brendan, from Sockeye, live in Durango, Colorado.  We really enjoyed getting to know them while we were all living in Skagway, and we even got to witness their wedding in July!  They have extended an offer for us to live with them for the winter season.  Durango Mountain Resort is hiring people for the ski and snowboard season, and it would be a good way for us to earn some extra income before leaving the country.  It would also be cold, and would delay our departure from the US for a little bit longer.  Although, we would get to be a little closer to friends and family for a little bit longer.

Option 4: House sit and work odd jobs through the holiday season, and then bike south or sail across the Pacific.
Thanksgiving is approaching quickly, and it would be nice to stay close and accessible to family throughout the holidays (and so I can attend my cousin’s wedding).  While we’re already in the country, we may as well stay a little bit longer so we can afford to visit with family.  House-sitting is a great way to stay somewhere, rent-free, and lots of people need house-sitters during the holidays (including our friends in Durango).

We recently discovered a very cool website that connects homeowners to trustworthy house-sitters while they are away for extended vacations or business trips.  The website is called trustedhousesitters.com and we have just started exploring the possibilities of living in beautiful homes in all parts of the world, watching over the house and sometimes caring for pets and plants while the owners are away. There are several websites like this, but trustedhousesitters.com seems like the best so far.  Membership is required in order to apply for house-sitting jobs, and there are ways for previous homeowners, employers, or others to leave references on the house-sitter’s character and caretaking abilities.  There’s even a section for a police check, so you can show that you have no criminal record.  We see the site as a great tool for helping us find places to stay without the commitment of a lease or the cost of rent, while also providing homeowners or pet owners a piece of mind, knowing their home will be in good hands.  If we do land a gig through this site, I will update our readers with a more detailed review.

We have been entertaining all of these options, and are open to other wild and crazy suggestions that people may throw our way.  Don’t hesitate to comment on this section!  It may not affect our decision, but it’s good to hear what y’all think.  While in the bay area, Dallas and I have been lucky enough to stay with his sister, Sherilyn, and her family, his friend, Linus, and his family, and his step-mom, Sandra.  We are working temporary jobs until we move on to the next locale!

“A good traveler has no plans and is not intent on arriving.” – Lao Tzu

← Day 14 – Gallaway to Doran Regional Park
A review of trustedhousesitters.com – from a sitter’s perspective →