It was a cold night. I woke up several times because  I was so cold. It wasn’t until I took all the clothes out of my bag and laid them out under me and my sleeping bag before I slept well. It was just that the sand on the beach was so cold, I needed a barrier between me and the sand. After finally getting a few hours of rest I woke up to the sound of waves, and seagulls and something splashing around in the creek outside of my tent. A lot of things went through my head, but I finally thought that it might be a deer or elk. As I gained the courage to look out, I unzipped the tent and startled a man that was throwing a stick for his dog to catch. It was his dog jumping around in the water and he said that my tent blended in so well with the scenery that he didn’t even see me! I guess I picked a good spot.

Somebody had a good breakfast…

I packed up camp and ate some breakfast on a big piece of driftwood and then walked my bike back up the trail to the road. As soon as I started riding I went past a gutted rockfish. I wasn’t sure if it was a good omen or a bad one, but either way it never surprises me what you’ll see.

I figured I had about 12 miles until the town of Gualala and I would try to get some coffee and warm breakfast there. The morning was foggy and cold, but the ride warmed me up and was quite pleasant. My phone was dead though, so I had to wait until Gualala until I could see what the day had in store for me. I found a nice little market that I remembered from 2 years before and got some yogurt, fruit, pastries and coffee and found a place to plug in my electronic devices. I still didn’t have service and couldn’t get good WiFi so I found a crossword to do while I waited for everything to charge.

While I was stuck trying to figure out a 7 letter word for converse I saw another cyclist park his bike outside. His name was Nate and was working his way down the entire coast, from just over the border in Canada all the way to the border of Mexico. He had actually started the trip back in August, but had to fly home when he got to Portland, and had recently just returned to finish his journey. It was his first bicycle tour and planned to be traveling for the next year. He said he had sold his house and spent the last year in Africa and didn’t know where he would end up after this trip. It always nice meeting likeminded fellow travelers.

As Sarah knows, this is a common scene for me…

It seemed like it took forever to get my computer and phone charged, and I finally got back on the road a little after noon. As soon as I started on my way, I heard some noise from my rear wheel. I couldn’t deal with it any longer, and stopped about 2 miles up the road to fix it. It was a loose spoke in the rear wheel. I think I had this problem before when I was traveling on a newly built wheel. I tightened it up and while I was at it realigned my brakes, cleaned my rear cassette and readjusted my fenders. This should definitely fix any noise (I hate little noises!).

I finally got back on the road around 1:30pm. I wasn’t off to a good start today, but the sun had finally come out and I was enjoying the ride. I saw a bunch of hawks and falcons along the road. Some with black and white striped tails, and some with long red feathered tails. Then maybe about 10 miles down the road I crossed a pack of wild turkeys. Sometimes I wish I was more of birder so I could identify all the cool birds I see. 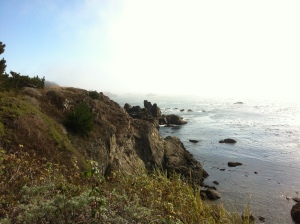 The coast was beautiful, but the 180 degree turns and ups and downs didn’t stop with yesterday’s ride. I found myself climbing quite a bit, but it was definitely a lot more pleasant with all the weight I left behind. My phone didn’t have service for most of the day and the towns were few and far between. I eventually stopped for lunch at a place called Stillwater Trail around 3:00pm. I had also just crossed over the 700 mile mark for the whole trip, which made it about 33 for the day. I ate some fruit and pistachios and an energy bar and figured I had another 15 miles or so until I could get a good meal in Jenner.

Sonoma county along the coast is absolutely breathtaking. It was such an awesome day today. The 15 miles to Jenner took a little longer than I expected because I had a ton of climbing to do along the way. The climbing though, also added to the scenery and I found myself high above the clouds and the ocean with nothing but sunshine surrounding me. I got so warm in fact that I decided to take my shirt off and work on my tan as I climbed higher and higher.

High up on a mountain

In Jenner a lot of the restaurants looked kind of fancy so I found a gas station with a deli. I got a spinach and feta calzone and some iced coffee and took a nice long break to eat.  It was starting to get late and I had about another 11 miles to get to Bodega Bay. I could see the road ahead of me was foggy too, which meant it was going to be a little cooler than the last part of my ride. A few miles up the road the fog got so thick that you could just make out the faint disc of a sun, and if I didn’t know better I would have mistaken it for the moon.

As I past the Bodega Bay Campgrounds, the sign on the outside said it was full. I stopped to check my phone to see if there was anything else available and was greeted by a man named Silas (sp?), who I had been leap frogging with all day long. He was traveling with an RV and some bicycles and a few other people. He was super friendly and had met Eli (who helped me camp the night before) and had heard a little about my travels. He seemed like a super happy guy and had travelled up and down the coast a lot over the years. It sounds like they were from Seattle but head south every fall to get warmer weather. He didn’t know if I’d find anything in Bodega Bay, but encouraged me to go on since I still had some daylight. 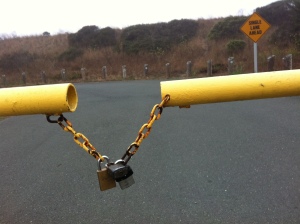 I couldn’t find a place to stay in Bodega Bay and it was super foggy. I had my two rear lights flashing and my two front headlights on, as well as my reflective vest and yellow jacket in order to be seen. I decided to continue on and wasn’t looking forward to sleeping in the cold again. Just a mile or two up the road I came across the Doran Regional Park. The park was apparently closed, but I needed to get off the road. I found a super sweet spot to camp in the sand next to a picnic bench and could even hear sea lions in the distance. It was quiet and warmer than the previous night. I was happy with the spot, and decided to wake up early just to avoid any confrontation that may occur with workers or security or people. I wasn’t sure why the park was closed, but I wasn’t bothered by anybody and it made for a serene night of sleep.

Total miles for the day: 61 mi

Posted on 20 October 2013, in Bicycle Touring, Portland to San Francisco. Bookmark the permalink. Leave a comment.