Sarah and family dropped me off at the Navarro River Junction, where highway 1 meets 128. They were all heading inland to drive through wine country and some redwoods, and I was continuing on down the Pacific Coast Highway to San Francisco by bike on my own. Lucky for me I was able to leave some weight with Sarah which minimized my load to just some essentials on my rear rack. My bike was still not light, but it would definitely make the 180+/- trek to SF a lot easier, especially with all the coastal climbs and descents. So, with that said, what better way to start the ride with an ascent!

My plan was to make it to the Manchester KOA which our fellow cyclist Adam told us about earlier that morning. It should only be about 20 miles up the road, but since it was already 4pm I figured it should be just about the right amount of time. The ride was nice, but it had a bunch of ups and downs. In fact, it started to feel a little like a reoccurring nightmare. The road would veer left, go down hill into a little river gulch, make a 180 degree U-turn to the right and head back up. This happened dozens of times throughout my ride. Down to the left, up and to the right, down, up, down, up… 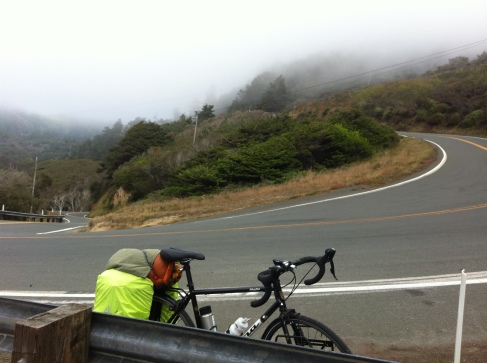 Some of the 180 degree turns continue going uphill

I tried not to stop too much, and was feeling so free with how light my bike was. I was a little worried about feeling unstable since I had all the weight moved to the back and nothing up front, but I got used to the new balance quickly and was moving pretty fast. I think I was averaging about 15mph instead of the usual 10-12mph. On the steep hills I was used to going about 4mph, but now was easily maintaining about 6-7mph. The big difference was that I was able to keep a higher cadence. With how my bike is geared (not having a lower gear on a third chainring), the hills would quickly kill my cadence which kills momentum and is less efficient overall. With my drop of weigh I was able to keep my cadence closer to what is most efficient. I also noticed that I was building up speed quicker on the flat sections, and able to keep it up near 20mph without the effort I was putting in before. All this made for a very pleasant ride to Manchester, and I passed the KOA a little after 5:30. Having still another hour of daylight I continued on and figured I’d find something in the next town up, Point Arena. 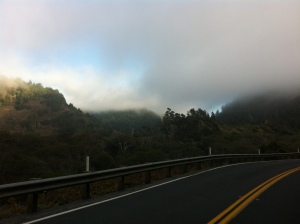 The blue sky to my left taunted me all ride…

I arrived in Point Arena around 6:30pm and stopped at the natural foods co-op market. They were closing at 7pm, so I didn’t have much time. My phone was dead and I was hungry so my plan was to just get a snack and some tea and charge my phone so I could hopefully find a place to stay. As I searched google for hotels and campgrounds, I was sad to see that nothing was close. I decided to charge my phone until they closed and then I took my hot tea to go and headed across the street to a restaurant/bar to get a proper meal.

I ate at a place called the Pacific Plate. It was tasty but a little pricey. The black bean soup and salad with homemade pesto ranch hit the spot. It was about 8pm when I hit the road again and it was dark and starting to fog up. I found a place just outside of town on my phone that looked like it would be a good spot. As I turned off onto the dirt road I started having second thoughts, and eventually when I made it 1/2 a mile up the road to a private residence, I knew it was a bad decision. I turned around, made it back on highway 1 and continued south. I eventually crossed a gulch and saw a beach down below. I pulled off the road to take a closer look and was greeted by another cyclist. His name was Eli and he had been camping down on the beach for the past few nights. He assured me it was the best place around and told me how to get down to the beach. I had to backtrack to the other side of the gulch again and headed to find a place to set up.

I dismounted my bike to walk it down the trail to the beach since it was so dark. I’m glad I did too because I saw something moving up ahead. At first I thought it was just the shadows from my light bouncing down the path, but then I saw it…a big bushy tailed skunk heading up the trail right toward me. I stopped in my tracks and made some noise. The last thing I wanted was to be sprayed by a skunk. The little guy looked up at me and then took his time getting off the trail and into the bushes. Skunks always seem to have a swagger to them, and I haven’t ever seen them move too fast. It’s like they know that you’ll wait for them because if you don’t they have not fear in spraying you. 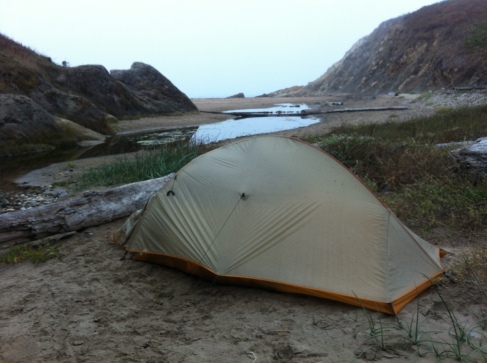 When I got to the beach I found the perfect spot tucked away behind some driftwood. It was cold and misty but I was so happy to find a good spot. I set up camp and put on my long wool clothing to try and stay warm.

Posted on 18 October 2013, in Bicycle Touring, Portland to San Francisco. Bookmark the permalink. Leave a comment.