Dallas and I found that we had made a wise decision to stop where we did the night before.  We packed up and were out of the campground before the sun came up, and started climbing a mountain just as the sun was rising.  This climb was not as treacherous as I had feared – the guy we talked to yesterday said it took an hour and a half to ascend – but it was still grueling.  We rode for maybe 4 miles up a steep, narrow, and winding road before we had any break at all.  There would have been no place to camp again for the next 27 miles, and it would have taken us forever to get there yesterday evening.

The worst part about climbing is temperature control.  Since the sun hadn’t warmed up the road yet, it started off pretty cold, and I kept having to stop to peel off layers as I worked up a pretty good sweat.  The road had warm and cold patches depending on which side of the mountain we were on, but it really felt cold as we started to coast down.  With no need to pedal and our clothes drenched in sweat, the apparent wind created by our downhill speed chilled us to the bone.  I put my gloves back on midway through the descent, but they were sweaty and useless.  By the time we had to pedal again, my hands and feet were numb.  We had another great climb closer to the coast, about 10 miles before we hit Westport.

Fog on the coast

When we finally reached the coast, it was foggy and much cooler than it had been on the other side of the mountains.  We pulled into the general store in Westport around 11, having gone just under 30 miles – and it was earlier than we can usually wake up for the day!  This is where we met Adam, a bicycle tourist from Nashville who had also started his tour in Portland.  We talked for a few minutes before Adam continued south and we bought coffee and shared some snacks. 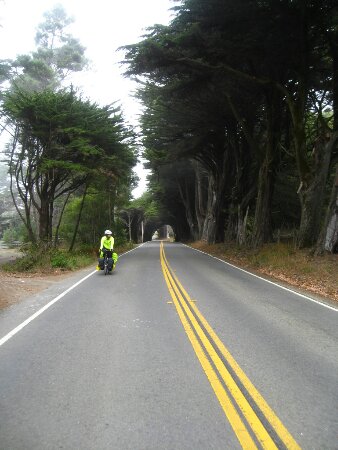 I struggle to steer Dallas's bike

I was anxious to get moving and be in Fort Bragg by noon to meet my dad and step-mom, Paulette, who were visiting from Rhode Island.  We still had 16 miles to go, and it was after 11:30 when we left the store, so it wasn’t going to happen.  To slow things down a bit more, Dallas and I switched bikes for a few miles.  This confirmed our suspicions that my bike is much easier to pedal up hills, with its touring chain rings.  I am impressed with Dallas’s strength and ability to grind up hills in ill-suited gears.  We did make it about halfway to Fort Bragg from Westport before we saw my dad and Paulette drive by in their rental car. 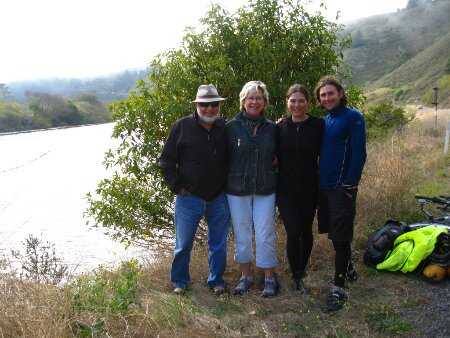 My dad, Paulette, me, and Dallas before Dallas departs on his bicycle

This is where I ended my day of riding to spend the next few days sightseeing San Francisco with them.  Dallas and I loaded our belongings and ourselves into the minivan and enjoyed the ride to Fort Bragg, where we ate lunch.  We stopped in Mendecino for ice-cream and drove a few more miles down the coast before letting Dallas out to ride the rest of the way to San Francisco on his own.  Dallas will hopefully update all of us on his solo journey from here.  I certainly look forward to seeing him when he arrives in the city!

Posted on 18 October 2013, in Bicycle Touring, Portland to San Francisco. Bookmark the permalink. Leave a comment.