Day 7 – Langlois to Gold Beach, OR 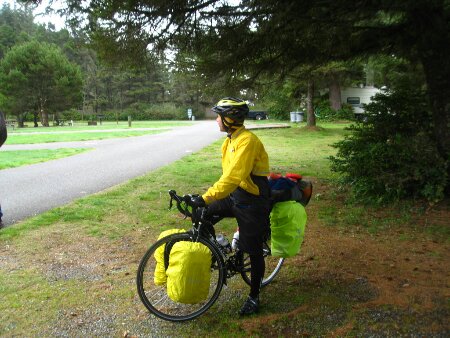 Dallas, listening to Mike at the campground, just as it starts to rain

Today marks the end of a week since when we left, and in total, we’ve gone 350 miles.  Both of us woke up bright and early, with high expectations for the day, which we failed to meet.  Dallas started tuning his bike derailleurs and tightening spokes, and a man in the campground named Mike struck up conversation with us, delaying our packing.  This guy had ridden up and down the coast 13 times before, and also around Australia, New Zealand, and Hawaii.  He stuck around for a while, and went on about bicycles, his dogs (at one point he had 12 of them living in his RV with him), and the felony he got after 13 years of selling marijuana in Michigan.  We were hoping to get to Port Orford and into a cafe before the predicted rain began, but it started misting just before we were ready to leave.  When we did venture out from the safety of the tree cover, it started to rain steadily. 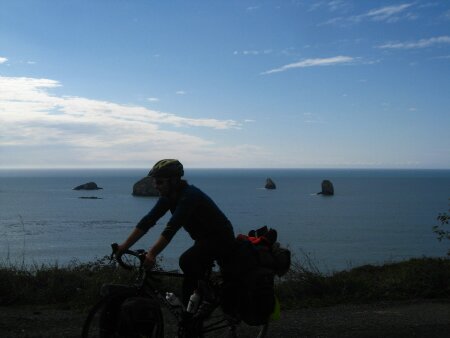 The first 14 miles to Port Orford were pretty miserable, but it actually stopped raining just before we got there.  Paradise Cafe is a small diner on Route 101 that boasts free WiFi.  We sat down in a booth next to a couple, and the man immediately started talking to us.  He told us that they were also camping around there, and they were impressed with our riding.  He also told us about their pug (named Pugsly) that only has three teeth and needs to eat special food.  Then he must have thought we were bowing our heads in prayer when we were actually trying to steal glances at our menus, because he told us how nice it is to see young people pray before a meal.  We politely engaged the couple in conversation, but then moved to a different table after ordering so we could sit by the one outlet we could find and charge our phones.  Before leaving, the woman gave us $20 for our breakfast!  We are always so blown away by the generosity and kindness of strangers, and this was no exception.  It definitely pays to be nice to strangers. 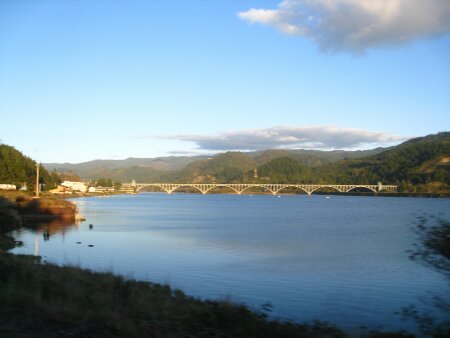 We had perfect weather for the rest of the day, but we were way behind our hopeful schedule, and our legs were just too tired to maintain a fast enough pace.  Much of the ride after Port Orford was within view of the ocean, and it really was beautiful riding.  We were still 28 miles away from Brookings (our goal) when we stopped in Gold Beach.  We found a really cheap motel, although we ended up spending more on dinner at the Port Hole Cafe (we were really hungry!). 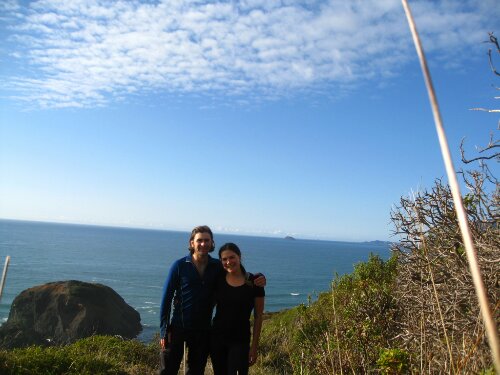