Day 2 – Gervais to Monmouth, OR 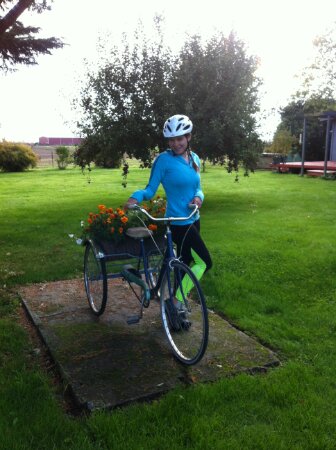 A lovely trike with flowers at Graham and Peggy's house - note the apple tree in the background!

This was supposed to be a rainy day, which was going to be quite miserable for riding bicycles.  I awoke to the sound of rain outside our window, but the sun hadn’t risen yet so I fell back asleep, thinking about what a wet start we were going to have.  When Dallas and I finally did wake up for real, the rain had stopped and blue skies were visible behind the dissipating clouds.  The weather forecast had gone from 80% to 0% chance of rain overnight.  Dallas and I are seriously the luckiest people ever. 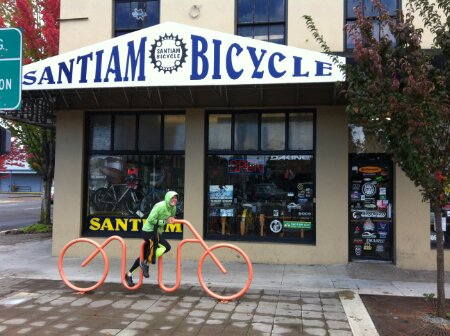 We got back on the road about an hour earlier than we had started the day before, hopeful to make it about 60 miles.  Twenty miles and almost 2 hours later, we were in Salem.  We stopped at the bike shop owned by Troy, Graham and Peggy’s son – and we arrived just as the sky darkened and started to spit rain at us.  Troy wasn’t there, but the other employees were friendly and said we could leave our bikes inside while we went to get lunch.  By the time we had finished eating, the sky was blue again and the sun was shining. 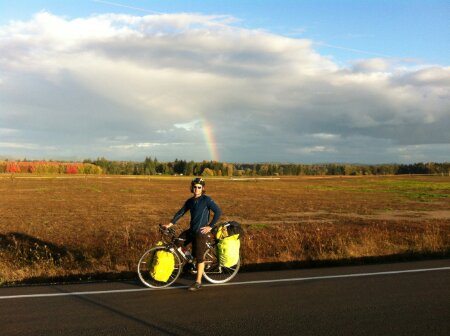 Our next stop came just 13-14 miles later.  Exhausted from the headwind and rolling hills, we took a short detour into the town of Independence to pick up some food at the market.  Just a block before the market, we passed a cafe advertising pies and ice-cream.  This was just what we needed.  The man working there came outside and watched as we were locking our bikes together as if we were crazy.  “Nobody ever steals in Independence.  They’d get shot.  The cops here are good, and everyone knows each other. No one steals.”  Still, we weren’t going to risk losing our new bikes!  No sooner than stepping inside, the sky opened up for the third time that day and poured rain onto our bikes.  The man, who called himself Dutch, asked how he could make our perfect day any better.  He explained that the kitchen had closed two hours ago, yet their Open sign was still on and there were three people sitting at a table drinking coffee.  He then ignored all of our attempts to say we just wanted dessert while he went on listing the sandwiches and quiches and salads that he could still make for us (it seemed that the only thing out of the question was the soup, which was apparently delicious).  Once we could finally get a word in, we managed to order lattes and pie (ice-cream came with the pie at no extra charge!).  As we were finishing up our pie, Dutch came over to our table and told the story of the historical town of Independence, which is the end of the Oregon Trail.  Then, he seamlessly interluded into a discussion on natural disasters and how the whole west coast from Crescent City to Vancouver is going to be destroyed by earthquakes, volcanoes and tsunamis.  Independence is the epicenter of the fault subduction zone, but Dutch isn’t concerned.  He’s prepared. 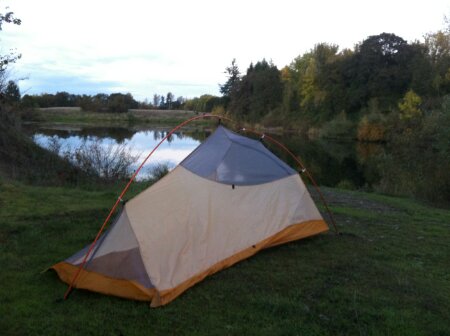 It was after 4pm when we finally said goodbye to Dutch and left his 2EZ Cafe.  The sun was shining again, but daylight time was limited.  Until just before Independence, we had been following the Willamette Valley Scenic Bikeway, but we decided to take a different route from here and try to cut 7 miles out of the trip.  This brings us down the opposite side of the Willamette River and through more farmland.  The scenery has been good so far, and the hills and headwinds haven’t been any worse than they were before we deviated from the bikeway.  Amongst all the farms and private property, we lucked out again today and found a small spot of state park land with a trailhead.  There was a no camping sign, and there was a bar across the entrance to the parking lot, but we were able to slide in with our bikes and find the perfect spot to pitch our tent just as the sun set.