View from the ferry between Juneau and Skagway

We were both so tired, Dallas and I didn’t talk to anyone on the ferry.  I was hoping to check out Haines, since the ferry was stopping there for two hours and Christy had told us it was a nice town, but when the ferry docked, I read a road sign pointing 4 miles to Haines.  With nothing of interest within walking distance during our short layover, I went back to sleep on the bench next to Dallas.  Neither of us were fully awake to appreciate the grandeur view for more than a few minutes before drifting off again, and I didn’t fully wake up until we were a few minutes from landing in Skagway, our destination for the summer. 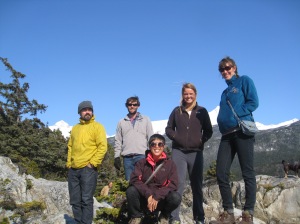 Scott, Dillon, Kristina, Kellee and Zabeth – some of our fellow guides and housemates for the summer

Dustin and Scott greeted us when we stepped off the boat, and 4 other new guides who had been on the same ferry joined us a few minutes later.  We all managed to load our bags into the Sockeye Cycle Van, and Dustin drove our belongings to the house while Scott led the rest of us by foot.  It was only a few blocks to the shop, and walking felt good after lounging around on the ferry for 7 hours (three of the other guides had boarded the ferry in Bellingham, and had been on board for 4 days).

Although it was clear and sunny that day, the announcement of an avalanche having recently blocked the white passage to the Yukon (pretty much the only way out of Skagway by land) reminded us that it was still very much winter in Alaska.  Scott, the shop manager who had previously been a mechanic for a tour company in Italy, provided us with numerous and entertaining stories.  He had arrived three weeks earlier and told us about his first day and days leading up to now, when it seemed he was finally able to talk to some other people who were seeing Skagway for the first time.  I think we all shared his wonder in what we’ve gotten ourselves into here.

Dallas, standing at Yakutania Point on the day of our arrival in Skagway

The owner of the company, Thom, greeted us when we arrived at our new summer home, the two stories above the Sockeye Cycle bike shop.  Then he hurried off to drive to Whitehorse, the nearest city, to buy supplies for the house and our welcome barbecue.  Because of the avalanche, he had to take an alternate route to Whitehorse, and it was uncertain if he would even make it back the next day for the barbecue.

Dallas and I will be sharing this space for the next four months with 10 other guides.