← Thank you to Skora, our first sponsor!
New Connections → 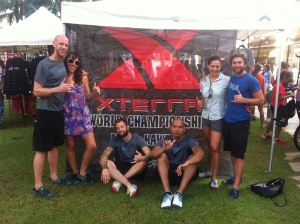 Team Skora the day before the big race

I had seriously underestimated the difficulty of the XTerra Trail Running World Championship Race.  Never had I encountered such steep terrain in a race of any distance, let alone a half marathon.  Before any race, one of two things usually happens, sometimes both in the same race.  1) I have the feeling of total unpreparedness, and my biggest fear is coming in last place, or 2) I feel like maybe I have a chance of placing (and hopefully winning money) in the race, or at least placing in my age group.  After looking at the times from last year, I seriously thought I might have a chance at placing.  Only 15 women had finished in under 2 hours, and the first woman crossed the finish line in over an hour and a half.  It was either a really non-competitive field or it was a really tough course.  I should have known from the title of the race and the size of the prize purse that it would draw a competitive field, but I was in no way prepared for just how tough it would be.

If I do this race again (and I hope I do, some day), I will train by doing hill repeats up mountains at least once a week.  Some parts of the race were so steep, just walking up was a challenge – my legs burning and breathing labored, I had to turn and walk sideways up some of those hills.  The scenery was incredible, but I could hardly enjoy it, since I had to keep my eyes on the ground to avoid stumbling on a root or loose rock.  I can’t wait to see the photos.

Dallas made the rest of us look bad by being the only one to finish in under 2 hours and crossing the finish line almost 20 minutes before anyone else on our team.  Gerrit managed to pass me on one of the hills and beat me by almost 2 minutes.  All six of us finished in under 3 hours, which may not be that impressive for any normal half marathon, but I am very proud of our team after conquering that course.  The official results of the race can be found here: http://www.jtltiming.com/results/x-oahu-21k.html

My feet after the race – that’s not a tan line!

Needless to say, our Skora’s got us through this tough race.  I wish I could say we remain injury-free, but 3 of us ended up hurting after the race.  However, all injuries were sustained prior to race day and while not wearing Skoras.  Gerrit had stepped on a nail at work a few weeks earlier, and his foot was sore from where the nail had pierced his heel.  Travis had injured his knee the day before while riding the strong surf on Oahu’s north shore.  Upon returning to Portland and visiting his doctor, he found out that he had torn his meniscus and ACL (but will not need surgery).  I injured my hip flexor the night before, just walking to dinner (wearing Vibrams).  Miraculously, the pain disappeared the instant the cannon went off to initiate the start of the race, but it’s back stronger than ever, and I can barely walk now.

As much as Dallas and I wanted to stay in Hawaii, it was not possible for us to find a way for it to work for us out there in the short time we had.  We both hope to be back some day (maybe for another Xterra race?).  Now we are back in Portland, saving up for the next big adventure!

← Thank you to Skora, our first sponsor!
New Connections →