Thank you to Skora, our first sponsor! 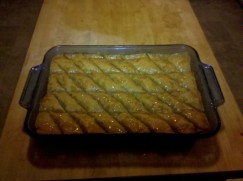 Happy Thanksgiving! Here’s a photo of my baklava, the way Grandma taught me to make it 🙂

I’ve been feeling inspired to write lately, but haven’t had much time since I finally started working.  Now, I would first like to say that I hope all of our followers had a wonderful Thanksgiving, if you celebrate it.  I made a broccoli/carrot salad with bacon, cashews, red onion and dried cranberries, Dallas made cranberry sauce, and I made baklava and pumpkin bread to add to the delicious food that the rest of our roommate and guests shared with us.

Meet Tara, the newest member of the household.

I was never a fan of Thanksgiving meals because I never liked turkey and wasn’t too fond of vegetables as a kid – I also think that it can’t be a good thing, environmentally, that every American household has to have a turkey one that one day of the year.  I’m sure lots of turkey ends up going to waste…and the poor (or lucky?) birds are forgotten about for the rest of the year.  However, I do enjoy the time this holiday gives us to spend with family and friends.  While this year I am unfortunately missing my family, I feel incredibly lucky to have good friends and an amazing boyfriend.  I certainly wasn’t expecting to find love when I set out on my bicycle last year, but I couldn’t be happier with Dallas and am so thankful that I get to share my life with him!

Gerrit, Alyssa, Michaelangelo, Dallas, Travis and me at the Skora office with our new gear!

Anyway, the biggest news in our lives since I last updated this site is that we now have a sponsor!  It’s not specifically for our bike tour (although, maybe it could be one day), but it does fit our lifestyle perfectly in that they are a running shoe company.  Skora is a new company based in Portland who came out with their first line of running shoes last year.  Dallas, Gerrit and I came across their booth at the Portland Marathon expo in October, and all of us ended up buying shoes from them.  After further communication with them, Skora agreed to sponsor six of us for the XTerra Trail Run World Championship that we plan to run in December this year.  So last Tuesday, Dallas, Gerrit, Alyssa, Travis, Michaelangelo and I all met up with the guys at Skora, where they fitted each of us to a new pair of shoes and t-shirts.  We’re all very excited to represent Skora at the race, which will be in Hawaii on December 2nd – we also look forward to extending our relationship with them into the future!  They are great shoes – very light and minimalist, and we think they’d be perfect for taking with us on our bike tour.

Posted on 24 November 2012, in Portland, The space between and tagged run, running, shoes, skora, sponsor, thanksgiving. Bookmark the permalink. Leave a comment.