Probably to make up for the long previous day, Dallas and I did not get very far for the next two days.  From where we camped, we rode 8 or 9 miles before eating breakfast at Waffle House (not the best choice).  We didn’t have to go far on route 17 (aka Ocean Highway) before it started giving off a vacation resort vibe.  The road was lined with all sorts of billboards, beachwear shops, fireworks stores and restaurants.

When we reached Garden City, we turned down to the beach, went for a swim and took a nap on the sand.  Well…I swam and then read my book while Dallas napped.  The water was cool and refreshing after riding under the hot sun.  Almost as soon as we left the beach and found a place to eat again, clouds rolled in and it started to rain.  When the sky looked safe again, we continued along the road to Myrtle Beach and set up shop again at a Starbucks.  I’m amazed (in a disgusted way) by how the seashore is so littered with hotels, and each one advertising their various amenities, such as lazy rivers and swimming pools.

Dallas almost got eaten by a shark in Myrtle Beach

It seems to have been bike week at Myrtle Beach, or maybe they are just preparing for bike week, because everyone had signs outside welcoming the bikers.  However, there didn’t seem to be an extraordinary amount of bikers around.  The next day (Wednesday) we saw considerably more people out on motorcycles, most of them not wearing helmets.

We stayed at Starbucks for quite a while, reluctant to get back in the saddle.  I think the long ride to Georgetown had worn us out a bit.  We could not find any couchsurfing hosts to stay with, so we started riding again in search of a suitable place to camp for the night.  The place we chose was off the beaten path and along a narrow trail through a heavily wooded area.  It was pretty creepy wheeling our bikes through the windy trail in the dark, and I was further frightened when I saw a pair of eyes watching us from a few hundred feet in distance. 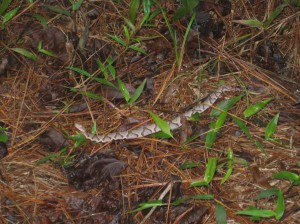 In the morning I left the tent to pee and almost peed on a snake!  It was a copperhead, the snake that people are most likely to be bitten by.  The bites are usually not deadly, but are very painful and require immediate medical attention.  This was a juvenile snake, which means they are more likely to inject venom when they do bite.  I backed away, and we kept an eye on the snake while we packed up the tent.

We found our way out of the wooded area and rode about 6 miles  to Cannoli’s Cafe, where we stayed for over 2 hours, eating breakfast and trying to motivate ourselves to move forward.  Once we got back on our bikes, we rode on a bike lane that paralleled the beach for several miles before rejoining highway 17.  This road brought us finally out of Myrtle Beach and out of South Carolina. 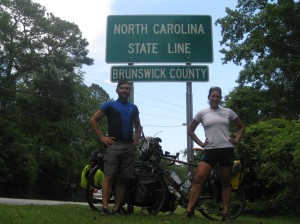 Shortly after crossing into North Carolina it started raining.  We stopped to share an apple on the side of the road and split a vegan raw bar that we had purchased in Charleston.  A few minutes down the road again, we came to a creamery and had to stop for ice-cream.  It rained again while we sat in rocking chairs on the porch eating our ice-cream.  Everyone around here seems to have big porches with rocking chairs outside.

Eventually, we made it to Shallotte, one of the few towns along our route.  We usually try to stop whenever we go through a town because places to find food can be hard to find in between towns.  We drank coffee and Shallotte and stopped at Walmart to pick up food for the next few meals before heading out of town to find camping.

The sun was going down, so we didn’t get more than 10 or 15 miles out of Shallotte before deciding to turn into a private hunting club’s territory to set up our tent before dark.  The dirt road was completely abandoned, and we turned down another dirt road that dead-ended in the forest.  There, in the middle of the road just before it ended, was the skeleton of a deer.  We set up our tent in the middle of the road several meters before the end, battling mosquitoes as we did so.  The ground was hard but flat, and I felt we weren’t likely to run into any copperheads here.

Posted on 24 May 2012, in Bicycle Touring, New Orleans to Newport. Bookmark the permalink. Leave a comment.