Between Atlanta and Savannah we had spotty if any phone service, and the few nights where we did have internet access we were too exhausted to do anything but pass out after a shower, so I apologize for not updating the blog sooner.

We got a rather late start leaving Arabia Mountain. Despite only going 40 miles the previous day, we were still getting used to traveling and were tired enough to sleep on the ground for almost 12 hours! It was raining in the morning when we woke up, so that didn’t help motivate us to get moving.  We slept in a few more hours while waiting for the rain to subside.  After packing up the tent and finding our way back on the road, we went to a nearby Panera to eat breakfast and use their free wifi. Dallas installed his new brake pads and water bottle cage while I blogged about the previous day.

When we finally hit the road for real it was after 4pm! Fortunately, the sun sets at 8:30 so we had a few hours of riding left. We started getting hungry before we had even ridden 20 miles, so we pulled into what was quite possibly the only option for food in the vicinity: Cowboy’s BBQ. While we didn’t have much of a choice, it was a good one. We split an order of ribs, pulled pork, and smoked turkey with a side salad and sweet potato fries, followed by a bowl of banana pudding and blackberry cobbler.

Once again, everyone who saw us stopped to chat about our trip. It felt kind of silly to admit we had only gone 60 miles since we started two days ago, but people were still impressed. One guy suggested we camp at a site not far from where we were eating, instead of trying to go another 20-30 miles to get to the nature reserve we were hoping to reach before dark. It was a good suggestion, and we ended up riding just a tad out of the way to get to Charlie Elliott, where they had free primitive camping. 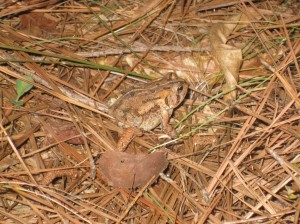 A toad near our campsite at Charlie Elliott

It was dusk by the time we got to the campground. Instead of setting up camp amongst the RVs that had already settled in around the various camp sites, we opted to go a short distance down a dirt trail and make our own camp site in the woods away from the people. There were plenty of spiders and moths to contend with, but fortunately not many mosquitoes and no sign of copperheads, about which various people had warned us.

Posted on 13 May 2012, in Bicycle Touring, New Orleans to Newport. Bookmark the permalink. Leave a comment.