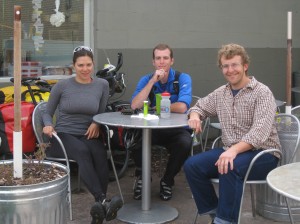 Me, Phil and Doug before leaving Athens

This morning my legs did not want to work for me.  I don’t know how late I slept, because I didn’t look at a clock until we were leaving the bakery we had biked to for breakfast.  After eating breakfast, Douglas led Phil and I for the first 7 or 8 miles out of Athens.

We stopped at a gas station for a break after 20 miles, and shortly after that we passed a pecan-cracking facility called Granddaddy’s Crack House.  I should have taken a photo of the sign.  For lunch, we stopped at the Publix grocery store in Loganville, where I found the coconut water I had been craving for the last few weeks.  While sitting and eating by our bikes outside, a few people approached to ask us what we were doing.  One of them was a cyclist driving an old VW bus who asked if we needed anything and warned us to beware of the traffic.  A woman, who was also a cyclist, with her daughter, came over to talk, and after going into the market, she came out and gave us a Publix gift card.  Once again, I am so touched by the generosity of strangers.  Everywhere we have been thus far, we have met amazing people, and I am convinced that we will find them all over the world.

We still had more than 30 miles to go from Publix, and it was already after 3pm.  Getting back on the bike after such a long rest is always the most difficult part of the day, but we had to get moving.  We were headed to a park about 16-17 miles away called Stone Mountain, where we would be able to get onto a bike path that would take us all the way into Atlanta.  Garmin wanted us to go through a gated community, and we slipped in before the gate closed after a car exited.  We ran into trouble when we were directed to go through another automated gate, that needed a key to get through from both sides.  I flagged down a woman driving by in a golf cart who informed us that we could not go in there unless we were members of the private golf course.  We had to go back out the way we came in, and find a way around it into Stone Mountain park. 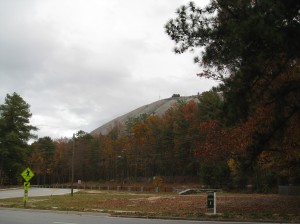 Stone Mountain (not the best view, I know)

As we neared a busy highway, we spotted two cyclists up ahead, and I asked one of them for directions into the park.  We had to ride against traffic on the freeway for a short distance in order to get into the park.  There was very little traffic at this point, but it was approaching dusk, which is the most dangerous time of evening because drivers have the least ability to see at this level of light.

The park was really lovely, and the enormous stone rising out of nowhere clearly explained the origin of its name.  I only wish we had reached it a few hours earlier, as it was getting darker and threatening to rain, although, there were numerous cyclists and runners out and about.  It actually did start to sprinkle a few times during the rest of the ride.  It grew even darker after we hit the bike path, and it became difficult to see, which slowed us down for the last 10 or 12 miles.  At least the warmth didn’t leave with the sun – the temperature remained at a comfortable 70 degrees for the duration of the evening. 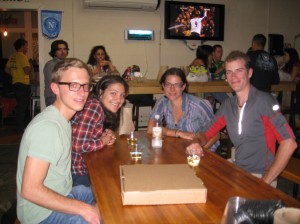 Drew, Julie, me and Phil, after eating pizza in Atlanta

We finally made it to Julie and Drew’s apartment at 7pm.  Phil knows Julie from Brown – she graduated at the same time as me, earlier this year.  Julie and Drew offered us snacks and beer while we cleaned up and got ready to go out for dinner.  The pizza place they brought us to was authentic Italian.  We squeezed onto the end of long table shared by other patrons and opened the first bottle of wine.  After nearly two pizzas and two bottles of wine, we all went home content and shared some pumpkin pie before passing out for the night.

Posted on 15 November 2011, in Bicycle Touring, Providence to New Orleans. Bookmark the permalink. Leave a comment.