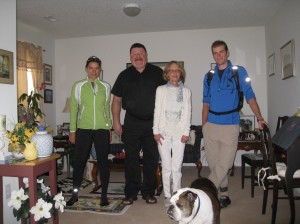 Me, Chuck, Grace and Phil (and Churchill) before leaving Anderson

We had a long day ahead of us, so Phil and I woke up relatively early.  In addition to the eggs Grace made for breakfast, I filled up on cake that she had made the day before.  We left Anderson just after 10am, for our longest ride yet.

After about 15 miles, Garmin led us off the road to a path that was marked with a no trespassing sign.  Another quarter-mile down this path were more signs posted, warning trespassers that they would be prosecuted.  Having little choice, we continued down the dirt and grass road for a mile, passing two hunting shelters and a field of cattle and donkeys along the way.  At the end of the trail, we had to push our bikes through some vegetation to get around a fence covered in barbed wire.  We emerged onto a road, directly across from the Shady Lady Saloon,  just a few hundred yards from the Georgia border. 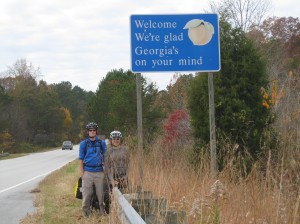 Crossing from South Carolina to Georgia

We stopped to eat lunch in a field, and the sun came out to warm us up.  The ride, while long, was not bad aside from a 9-mile stretch on a main road with fast-moving traffic that seemed to stretch forever in a gradual uphill battle against the wind that made me envious of anyone who might be traveling in the opposite direction.  Athens is much hillier than I expected.  The last 2 or 3 miles consisted of numerous steep hills, and it felt good to finally be done for the day.

Douglass is a couchsurfer who had stayed with me a few years ago during his own bicycle tour up the east coast.  Him and his girlfriend, also named Sarah, were hosting us in Athens at Sarah’s condo.  Sarah left shortly after we arrived to see a show of REM cover bands, but we met up with her and her roommate, Lydia at a frozen yogurt place after biking downtown to a sushi restaurant for dinner with Douglas.  When we got home, we were completely exhausted.  Douglas mapped out the next day’s route to Atlanta, which is as long as the route from Anderson to Athens – and he says it’s hilly too.  At least it will be a warm day, although the wind will be against us again.

Posted on 13 November 2011, in Bicycle Touring, Providence to New Orleans. Bookmark the permalink. Leave a comment.