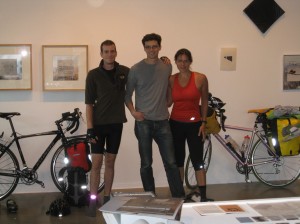 Before leaving on October 13th, with Pete at his studio

In the morning, Pete and Sarah made apple pancakes for breakfast, which were delicious.  We only had to ride 37 miles to Norwalk, so we got off to a late start (around noon).  After packing up and saying our goodbyes, we were off for day four.  Phil had spent a fair amount of time figuring out how to get Garmin to tell us our route, which facilitated our navigation considerably.

We stopped once for lunch, at a sandwich shop in Stratford called Roly Poly.  The roads were pleasant aside from a bumpy stretch through Bridgeport.  Having Garmin know the route and tell us where to turn was a huge time saver.  Still, we didn’t arrive at our host’s house in Norwalk until just after 5pm.  Michael is also a triathlete and plans to go on a cycling tour himself next spring, riding out to his daughter’s graduation in California.  We relaxed in his living room, drinking Sam Adams Octoberfest and talking about bicycling, while he prepared dinner.  Since we’re expecting rain tomorrow, we’re hoping to get an early morning start in our ride to New York City.

Posted on 13 October 2011, in Bicycle Touring, Providence to New Orleans. Bookmark the permalink. Leave a comment.