This morning I awoke with numb arms, having slept on them.  During breakfast (Tina and Greg made blueberry pancakes), I embarrassingly drank a sip of maple syrup that had been placed in front of me in a mug before realizing it wasn’t coffee.  The day was off to an interesting start. 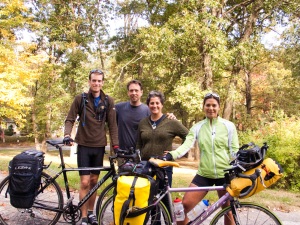 Morning of October 11th before leaving Tina and Greg's house

Greg and Gioia snapped some photos of us before we left Mansfield.  We were only 6 or 7 miles from the UCONN Dairy Bar, so our first stop was to get ice-cream.  Twelve miles later, we broke for lunch at Nature’s Grocer in Tolland.  This is a great natural foods store, where I must return some day (and of course stop at the dairy bar while in the area).  After lunch, we rode to Hartford and stopped at a park and caught up on missed phone calls while waiting for Phil, our Warm Showers host for the evening, to get home from work.  Somewhere along the last mile to the house, another cyclist, Bill, started riding and chatting with us.

Sitting on a bench in a park in Hartford

Phil was very generous when we arrived at his beautiful home in West Hartford.  He cooked a wonderful dinner while we showered, and he even drove us to the nearby Best Buy so we could buy a netbook.  Now we can finally work on getting the website filled with content, upload photos and videos, and, most importantly, figure out how to get maps for Garmin.  When we arrived back at the house, we met Phil’s wife, Bobbie, who had just started a new job.  The two of them had used Warm Showers once previously when riding a tandem bicycle in Rhode Island, and they are excellent hosts.  Already, I am definitely eating better than I ever have when I lived alone in Providence.  Both Phil and I hope that we can someday be as hospitable to other travelers in the future.

Posted on 12 October 2011, in Bicycle Touring, Providence to New Orleans. Bookmark the permalink. Leave a comment.