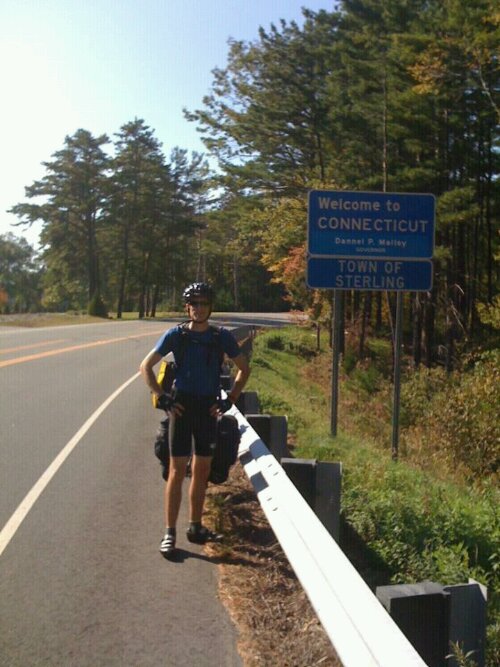 Phil and I had decided it would be a good idea to meet at a local coffee shop for an hour or so before leaving to let friends and family say goodbye one last time and ride the first few miles with us for as far as they wish.  We had a good turn-out for the send-off gathering.  After eating and making sure the bikes were all packed properly, Phil and I took off, escorted by Phil’s parents and Dick, Cameron and Adam from US Open Cycling Foundation.  It was sad to say goodbye to everyone, and I will miss the people more than anything.

We started down the West Bay Washington Secondary bike path towards Coventry and stopped for ice-cream near the end.  When we finally turned off the greenway, it was just me and Phil.  We had begun the first day of a very long journey.

The day was predominantly uneventful, aside from a pit stop at a biker bar/pizza restaurant just over the Connecticut state line, where the owner hooked us up with ice water and the regulars had plenty of questions and advice for us.  There were a few bike paths that existed in Google maps but not on the roads, so we ran into a few dead ends and climbed a few unnecessary hills.  As we neared the home where we were staying that night, the roads grew even hillier.

Tina and Greg live in Mansfield with their 5 year old daughter, Gioia.  They were kind enough to host us for our first night on the road.  They shared their delicious dinner with us, including homemade wine, homemade bread, and homemade strawberry ice-cream!  We are both very grateful for their generosity in hosting us.

Posted on 10 October 2011, in Bicycle Touring, Providence to New Orleans. Bookmark the permalink. Leave a comment.