Lenin and I biked from the bus station in Cali to an overpriced cafe for breakfast. This is where we start spending money a little recklessly, compared to our earlier time on the road. From there, we went to a gelato place and splurged on gelato. We were the only ones there. After spending an hour or so using the Wi-Fi at Ventolini’s, we went to a sushi restaurant around the corner for lunch. I was really appreciating all the different food options we had in Cali after traveling through small towns that only offered the same type of rice- and meat-based dishes at every meal. Lenin noticed this, and he went above and beyond to appease my wandering appetite.

One of the many murals in Cali

We headed to a neighborhood where all the hostels are located to inquire about working in exchange for free room and board. We went into every hostel we could find but had no luck in finding a work exchange deal. Most of the places already had an Argentinean traveler working for them.

We ended up going to the cheapest hotel we could find, which was cheaper than all of the hostels for a reason. The room looked like it had been lived in. The girl who showed us the room had to unplug her phone that was charging in the outlet and remove some of her personal items before letting us in, and there was still a half full cup of something (juice? soda?) on the table that served as a desk when we rolled our bikes in. There were holes in the ceiling where daylight was peeking through, but fortunately rain was not in the forecast that night. 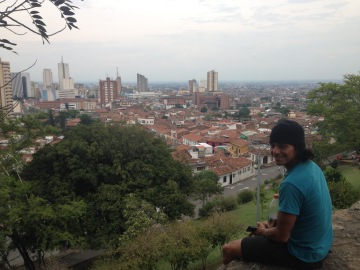 Lenin sits on the edge of a park overlooking Cali

The next day, we resumed our search for a room and started following a lead about a chocolateria that was rumored to need help at the moment. We passed an Arabic restaurant, and then backtracked a few steps to talk to the owner, Olga. Lenin did most of the talking, explaining that we were looking for a place to stay for a few days and were free to help in exchange. Olga was interested in learning how to make baklava the right way, and I could teach her. She agreed to pay for us to stay at a hotel for a few days in exchange for sharing the recipe I learned from my grandmother.

Before we solidified a deal with Olga later that evening, we went to a hostel that was owned by the friend of a person who had couchsurfed with Lenin in Medellin. This guy had recommended we go there, but we couldn’t find it on our first day. The owners of Mi Tierra hostel were a mother and daughter, and they were in the process of renovating the building so it would pass inspections. Their next inspection was coming up that week, and they still had some work to do to get it to comply with the fire safety regulations. The woman who was friends with Lenin’s former couchsurfer wasn’t home when we stopped in, and her mother was too busy to talk with us then, so we made plans to come back the next day.

That night we went to the apartment of our friend Catalina’s grandmother. We knew Catalina from Providence, and she hooked us up with her grandmother’s contact info and address and told her we would be coming. She lived alone in an apartment complex on the north end of Cali, and she honestly scared me. She refused to try to understand me when I attempted to speak with her, and she insisted that Lenin do all the talking. From what I gathered of their conversation, it was all about how she loved traveling, but she hated Americans and that there was no reason to go to the US except to see the Grand Canyon, Niagara Falls and the Brooklyn Bridge. The only reason she thought the Brooklyn Bridge was so interesting was because of how long it took to build and how many people died in the process.

While we were at Catalina’s grandmother’s apartment, we confirmed plans to meet Olga at the Arab restaurant. In the morning, we heard from the owner of the hostel about a work exchange there, so we were able to rearrange our agreement with Olga to teach her the baklava recipe in exchange for a meal at the restaurant and a lesson on how to make a semolina cake with orange syrup. We worked that morning at the hostel, scraping paint and adding a non-skid grip to the stairs. Then we biked over the restaurant to make baklava and cake. 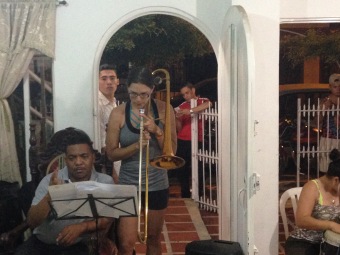 Trying to follow along on one of the band member’s trombones.

Work at the hostel got us a free place to stay, plus lunch every day. We just had to work 4 hours a day. The next two evenings we went salsa dancing, and the last evening we met Olga and her husband to go to her husband’s band practice. Olga’s husband is a percussionist in a salsa band, and I got to borrow a trombone from one of their trombonists and sit in on a song. It was nice to play again, but I felt a lot of pressure as the special guest of their practice when the solo section arrived and everyone was just waiting for me to solo (I’m terrible at being in the spotlight).

After the band practice, Lenin and I caught a taxi back to retrieve our bikes and biked to the bus station to catch an overnight bus to Medellín. This bus ride ended at the top of a mountain, just shy of Medellín, when we were caught behind a truck thay had flipped over on the narrow, winding road. Sleeping on the stopped bus for about an hour before noticing that it hadn’t been moving, we looked up where we were. At the top of Alto de Mina! We had both biked this road from Medellín before, and we knew the ride down was quick and easy. We also had no idea the bus would be backed up, so we asked the driver to get our bikes from under the bus and we were off. It was a beautiful morning, and it felt great to be back in Antioquia (probably the most beautiful department). 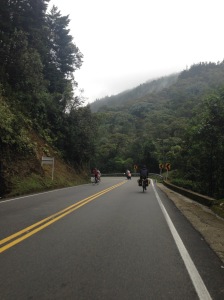 Riding back into Medellin from Alto de Mina

We passed several buses and trucks in the line of traffic before rounding a hairpin turn on the descent and seeing the cause of the backup. A big tractor trailer truck had tipped over, completely blocking both lanes of traffic. It lay on its side, and we first saw the underside of the long truck, with its wheels sticking out uselessly. We were able to pass by with our bikes, and left behind a crowd of people standing around and staring. The top of the truck was ripped open, and it looked like it was carrying water bottles. The remainder of our descent was incredible, with absolutely zero traffic to worry about coming from behind. We also passed at least 30 or 40 other cyclists on their routine morning rides.

Comments Off on Cali