Where to begin?  In waiting for the perfect inspiration to post, I have allowed too much time to go by and too many things to happen that writing a thorough update has become overwhelming.  I will do my best now.

Time has a way of passing faster when you’re not paying attention.  I am lucky to have enjoyed my time so much in the past few months that I was barely aware of its passing until another notch on my personal timeline hit and I am celebrating, or experiencing, my 30th birthday.  While I wouldn’t call it a celebration, it is an experience – and a little reminder that time does keep going, and nobody has yet figured out how to control that. 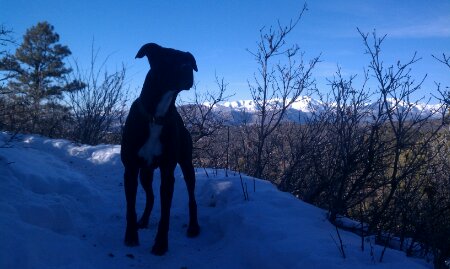 Liza Jane, during a trail run in Durango

Dallas and I were dog sitting and house sitting in Durango, Colorado for about 6 weeks.  Dallas went back to California on Christmas Eve to sell our bikes and collect some belongings while spending the holidays with his family.  I stayed until New Year’s Eve, and attempted to rent a car to drive to Denver to catch a flight to Detroit for my cousin’s wedding.  After walking around Durango for 3 hours between a few different car rental companies, I conceded to defeat.  Despite having plenty of savings in the bank to buy a car, let alone rent one for a day, I was turned down by every rental company because I didn’t have a credit card.  This is one of the most ridiculous things about the US.  These companies would be perfectly fine renting a car to someone who is hundreds of thousands of dollars in debt as long as they have a credit card, while the people who are careful never to spend more than what they have are punished for not having any credit.  I had to get to the Denver airport the next day, and there was literally no way to do it.  For $400 and an expensive cab ride to the Durango airport, I could have bought a plane ticket to Denver that would have gotten me there a few minutes after my flight to Detroit took off.  I felt utterly defeated and helpless. 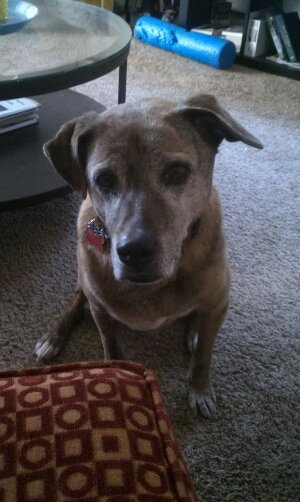 Naturally, I began scouring craigslist for…anything.  Durango doesn’t have enough of a presence to require its own craigslist page, so I was searching the entire western slope of Colorado, with no luck.  I began expanding my range to areas south of Durango. Albuquerque, Flagstaff, Farmington, Phoenix…I was desperate.  Eventually, I found someone who was driving from Phoenix to Cleveland.  While I was originally hoping for a ride to the airport, I ended up securing a ride for myself all the way to Michigan.  AND I got to stay in Durango for an extra day and hang out with Liza and Coda, the two dogs I was sitting.  As luck would have it, my flight out of Denver was canceled and I was able to get full credit for the price of the flight I would have missed anyway.  The drive took two days, but Ray had done the drive many times before and dropped me off safely at the hotel where my family was staying in time for the wedding rehearsal dinner.

My beautiful cousin Rachel and her new husband, Ben, along with the rest of the wedding party

While I love my cousin Rachel, I wonder about her sanity when it came to picking a time and location for her wedding.  I’m pretty sure everyone who was flying in had trouble related to snowy weather conditions, and there were just as many delays or cancellations on the way out.  I amazingly managed to fly out of Detroit somewhat on time, but the plane I was destined to take from DC to Providence was stuck somewhere else so I ended up spending an extra 7 hours in the airport after that flight was canceled.  Had I been allowed to rent a car, I probably could have driven to Providence in less time. 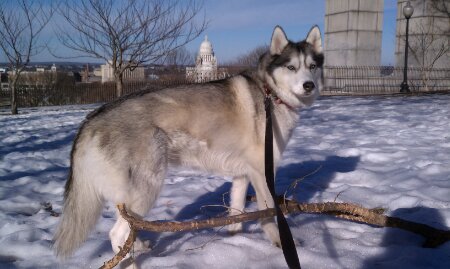 Back in Providence, I am dog sitting again. This time for Kyla, the husky.

Dallas met me in Providence a few days after I arrived.  It was his idea to come back to Rhode Island and try it out for a while.  We hadn’t had an income since September, and we really needed to take some time to rebuild our bank account balances.  I vaguely questioned Dallas’s sanity as well for choosing to come to Providence in January, but he really didn’t know any better.  I am happy to be back in an area where I’m surrounded by familiar faces and places, and I think my friends and family are happy that we’re here (for now).  Now I just need to figure out how I’m going to save enough money to hit the road again in a few years.  Dallas just started a job at Brown, so send him congratulatory messages!  He will be working part time with full time benefits, and he may choose to stay long enough to earn a degree while he’s here.  This means we could be here for a few years!  But I have every intention of still completing my bicycle journey around the world.  During this pause, I am thinking about starting a business to help support our goals and mission of promoting bicycling!  I will update as things unfold…

Posted in Durango, Rhode Island, The space between