Growing the sport of cyclocross in Rhode Island 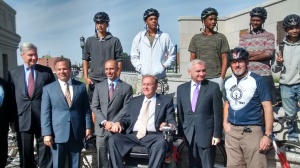 A few teammates attended the opening ceremony for the George Redman Linear Park on the Washington Bridge in September and got a good photo-op with Rhode Island’s most prominent politicians.

I think most people thought Ed Raff was crazy when he started talking about the possibility of starting a high school cyclocross team at his school in Providence. I have to admit that I was skeptical that he could pull it off in just one short season. Even Donny Green, the elite cyclocross racer that Ed recruited to coach, had doubted its success when he first approached Ed to help get the team up and rolling. However, with the support of Providence’s newly elected Mayor Jorge Elorza, a partnership with Tom Bacon from Mt Pleasant High School, and the passionate dedication of 8 high school kids from the Met and Mt Pleasant, the One Providence Cycling team has become a big hit. 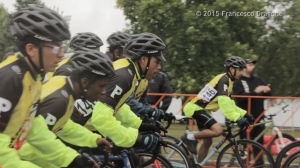 Starting off the first race of the weekend during the KMC Providence Cyclocross Festival.

I had the pleasure of witnessing these kids race their first race, in the cold and miserable rain, on the first weekend of October during the KMC Cyclocross Festival in Providence. Donny had started coaching them less than a month earlier, and most of them were riding single speed steel framed bikes that Ed had bought through State Bicycle. Most of these kids had little to no prior experience handling a bike in such technically demanding conditions, but they all stayed in the single speed race that evening, despite getting lapped, despite the miserable weather conditions and having a hard gear ratio, they never gave up. It was painful to watch, honestly. They looked defeated every time there was a hill, every time they had to walk laboriously up a flyover, and every time they had to dismount and remount their bikes. You could see how much they exhausted themselves, and they literally gave every ounce of effort their bodies could muster to finish that race. 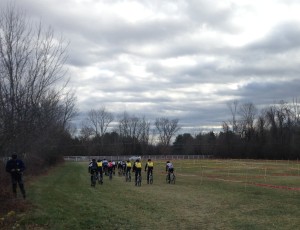 There they go, off the start at Monstah Cross in Walpole, MA!

Fast forward about six weeks, and 5 members of team have just completed their second race. Compared to Providence, this race was pretty flat and nontechnical, but the wind made it tough. It was great for people with a lot of power who could maintain a fast pace for a long time. For a newer rider, the relentless pace set by the leaders  and the lack of recovery opportunities made for a very challenging race. Amanda Resch, a second year racer and manager of Legend Bicycle, joked that the race that day was so aerobically demanding it made her want to quit cyclocross. For The One Providence kids, it was yet another suffer fest. They may have still been the last 5 men to finish the single-speed race, but they hung on for all 40+ minutes (there were 3 DNFs). Their perseverance is admirable, and they can only get better from here. 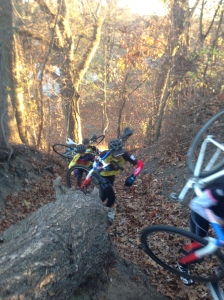 Practicing shouldering their bikes and running up a steep hill at Roger Williams Park in Providence.

I’ve started attending practices to help with coaching (and learn a bit more myself), and I’m very excited to see how these kids will fare in their next race. They have less than two weeks to hone their newly acquired skills and try to increase fitness with ever-decreasing daylight hours working against them. For most of the month of October, practices were sporadic because their coach, Donny, had both his dad and grandfather pass away and was understandable absent. Donny’s cousin created a GoFundMe to help raise money for One Providence Cycling, so the team can get better equipment, cover race entry fees, eat a healthy breakfast and post-race meal, and maybe pay their coach a little bit (although Donny states that he was never expecting money from this endeavor)! If you like their story and want to see them succeed, consider donating here. 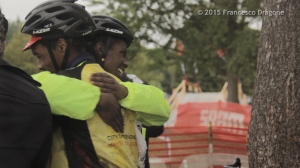 After seeing them in action, I truly think that Ed Raff is a genius for creating this cycling team (either that or he got very lucky). This is a great way to get kids to be active and involved in a team sport that can also double as a mode of transportation and a lifestyle. After most players of team sports like football, rugby or lacrosse have retired due to injury or ‘old’ age, cyclists can maintain their sport for a lifetime. Bicycling has been predominantly a poor person’s mode of transportation but a rich person’s sport, and it’s about time that changes.

Posted in fundraising, Rhode Island, The space between