La Ruta de la Muerte: aka The most dangerous road in the world

As Lenin and I were preparing to leave Will’s house in Mocoa, he told us about this place that’s just a bus ride away and has a very nice lake. We got a late start as it was, but Will said we could get there in three hours, eat lunch and maybe swim in the lake before coming back or spending a night.

We left our bikes at Will’s house since we planned to return before he had to clean out his place, and all we brought was a backpack with a few extra layers to keep warm. We were really hungry, so decided to have lunch before leaving. We had set a $30,000 pesos daily budget for ourselves, and the bus to Sibundoy cost $30,000 per person, so we tried to hitchhike first. Eventually, a truck pulled over and told us that we could come for the ride for $15,000 altogether. We accepted.

The road between Mocoa and Sibundoy is known as the most dangerous road in the world. This is mainly because of the high risk of landslides, and the high number of people who have died on the road while driving. Along the road were signs warning of the landslides in every possible way you could describe a landslide, including “piedras caídos”, “zona geológicamente inestable”, “derrumbes”, “deslizamientos” and even “avalanches”, just in case you didn’t understand one of them. There were no other roads to turn off of this narrow winding road that we were on, and no houses or roadside attractions, but the signs for landslides frequently dotted the long road, as if people would be coming onto the road anew and not know about the hazards, or just in case people forgot and started to feel too comfortable. There were several sections where we crossed waterfalls, water falling onto the rocky road from a sheer mountain wall on one side and rapidly passing underneath us to fall off the cliff on the other side of the road. 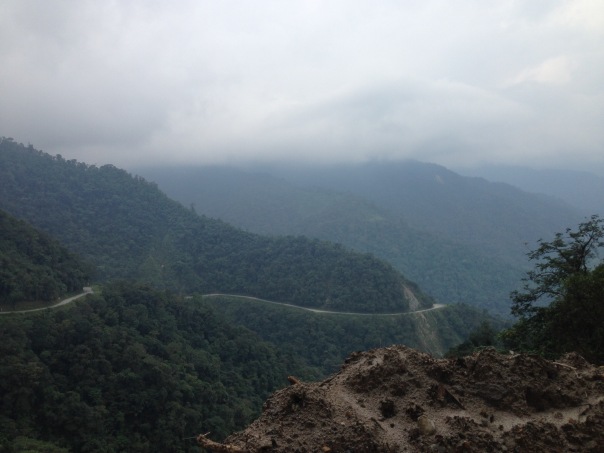 The truck we were in was traveling with another truck that had two drivers in it, and both trucks were empty in the back. Together, we made three stops in total. One to pick fruit from a tree on the side of the road, the second to light a candle at a Virgin Mary statue on one of the ridges, and a third for coffee and snacks around the midpoint. After the last stop, one of the drivers from the other truck switched spots with our driver so he could rest. Lenin, who was sitting next to him, didn’t notice this switch until we were well into the second half of the ride.

It was dark when the two trucks pulled into the town before Sibundoy to load up with cal, or lime. This agricultural product is used to clean the coca leaves in cocaine production. While loading both trucks, our original driver confessed he had forgotten we were in the other truck. Loading took maybe half an hour, and then our original driver brought us the rest of the way to Sibundoy. 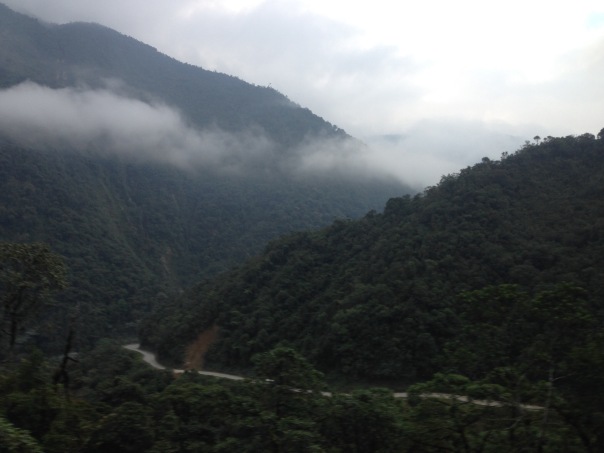 The drive that we thought would only take 3 hours took more than 7 hours, and we learned that the town was still almost an hour short of reaching the lake that Will had told us about. We had contact info for Cabunga, a WarmShowers host in town, so we decided to try to stay with him and see the town in the morning.

Posted on 29 March 2017, in Bicycle Touring, Colombia and Ecuador and tagged colombia, danger, dangerous road, hitchhiking, sibundoy, travel. Bookmark the permalink. Comments Off on La Ruta de la Muerte: aka The most dangerous road in the world .