When we went to Guatape, we packed everything, including our bicycles, just in case we didn’t come back to Medellin. When your only plans are to “go with the flow” you never know where you may end up. We ended up staying on Edwin’s house boat in Guatape for three days because I was too sick to go anywhere.

When we finally left Guatape, it was to bike to Lenin’s friend Paola’s finca in the mountains just outside of the town of San Carlos. We would bike there via San Rafael and then bike back the next day to catch a ride with Edwin back to Medellin for Christmas. Paola wasn’t able to go to the finca because she was pregnant. I didn’t understand why this was a problem until we got closer. We were traveling very light, and I felt less prepared than I ever have before started a bike tour, but I figured we would be fine.

Heading out from the colorful pueblo of Guatape

​
The first 20 miles to San Rafael went by in a flash. The road was smooth, predominantly downhill, and the weather was perfect. We coasted all the way down to San Rafael from Guatape in about an hour. The total distance for the day, according to Google maps, was only just over 30 miles. We were thinking of having lunch in San Rafael, but it was still early, so we just stopped for a snack at a bakery and decided to keep going. Before leaving, someone asked us where we were going. When Lenin answered, “San Carlos”, the man seemed surprised and told us that it was 60 kilometers. That didn’t seem right, so Lenin asked a policeman to confirm the distance. He told us it was 42 km. Double-checking our map, we still saw a way that was only 13 miles. When asking around town about this route, everyone answered that it was impossible to go by bicycle, and that it would take much longer, even though it was half the distance. We decided we were up for the adventure, so continued to follow our map in spite of all the warnings.

The road from San Rafael, long before it got too gnarly

​
Almost immediately upon leaving town, the pavement disappeared and the road started to ascend up a mountain. We then encountered two police officers on motorcycles who told us yet again that the road would be impassable on our bikes. We kept going. The next stretch of road was so muddy that our pedals would hit the mud when riding in the ruts left by previous, much heavier vehicles, but we still managed to muscle through the deep mud. Eventually the road grew steeper, and the mud was replaced by loose gravel and jagged stones. When it started to rain, Lenin and I took a break. Lenin had just been explaining to me that we should talk to people we pass because they might invite us in for a coffee and then we can wait out the rain. I didn’t have any expectations of seeing people who would welcome us inside on this lonely road, but sure enough, when it started raining there was a house on the side of the road with a woman who invited us to come under the roof to stay dry. While we were there, she made us coffee from beans that she grew herself. 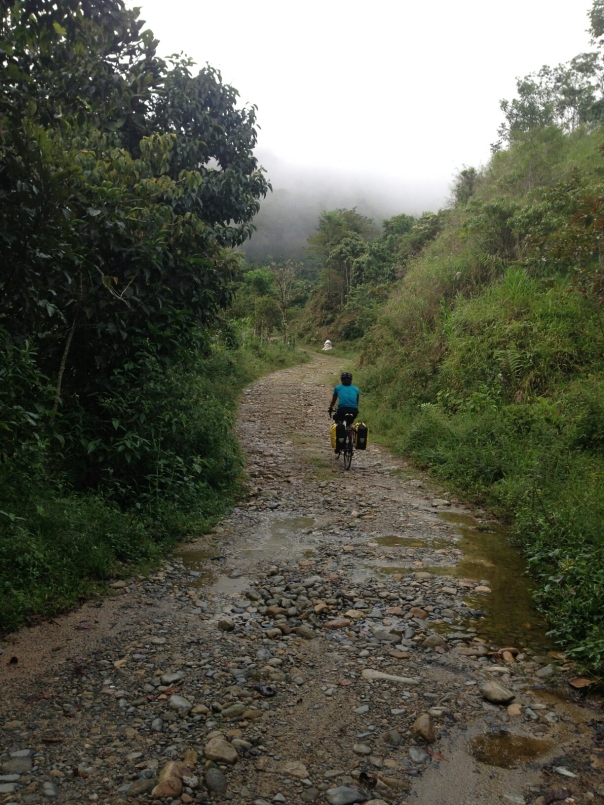 This road was rocky, but it gets worse…

At this point, Lenin decided to put more air in his tires, since he had let some out in between Guatape and San Rafael in fear of the tire exploding with the rising temperatures earlier in the day. Now we were on a rocky road and needed as much air as our tires would permit. Before leaving the woman’s house, he noticed that his tire had gone completely flat. We quickly replaced the tube, as the old one now had a hole near the valve stem, and got back on the road. However, less than a mile up the road, Lenin got another flat. Of course we hadn’t brought a patch kit or tire levers, so Lenin used his toothbrush to pry the tire off the rim. Since we had already used the spare tube, I decided to try tying a knot in the tube around the hole, since I had seen my friend Amanda do this once while mountain biking with some success. It actually worked quite well, until Lenin got yet another flat tire while testing it out. Then it started raining again. Since we couldn’t tie another knot in the tube, we resorted to using the extra tube for my bike, which was about a centimeter wider. This lasted only another mile or so before he flatted again. This time the air was leaking out slowly enough that Lenin could pump it up and ride a few hundred yards on it before having to stop and pump it up again. He quickly tired of this though, as the tire began losing air more rapidly with each repitition.

​
We had just made it to the high point of the road, but we still had about 5 miles to descend on that road before going up again to where Paola’s finca was. The sun was just about to set, and we had barely gone 7 miles from San Raphael. We started walking down the mountain as it grew darker by the minute. To make matters worse, the seatpost bag I was using to carry half of my stuff broke, and I had to carry it on my shoulder. We walked on until it was pitch black before turning on our headlights, which only illuminated the thick fog and the occasional frog hopping across our path.

​At the bottom of the road, we came to the junction of Vallejuelo, where two people were sitting outside of a house. One of these people had a truck, and he offered to drive us the rest of the way to Paola’s finca. Paola had also phoned someone to help us get there, but he only had a moto. This guy showed up to the house where we were and joined to show us the way. We piled all of our belongings into the back of the pickup truck and climbed in for the ride. I was astounded by the condition of the road, and I felt guilty for the guy who was taking his truck over such damaging terrain on our behalf, but he didn’t seem to mind. The rocks were huge, potholes even bigger, and we were going up a pretty steep hill the entire way. In the darkness, it felt more gnarly than my rockiest mountain bike ride. We stopped at a small tienda where we could keep our bikes safe on the way up, and then continued on up until we got to a fence. Paola’s friend got out and opened the gate for us, and the truck turned to drive through a muddy field to another gate. Beyond this gate was the house. I was skeptical that the truck would make it back up and out of the mud, but we didn’t stick around to watch them leave.

Posted on 8 March 2017, in Bicycle Touring, Colombia. Bookmark the permalink. Comments Off on Guatape to Puerto Rico.