A long overdue update – on my birthday! 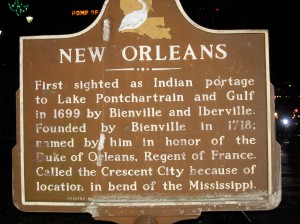 I apologize for leaving all of you in the dark for so long while Phil and I have immersed ourselves in the culture that is New Orleans.  If you have ever been here, I hope you understand.  There is so much to say right now, I don’t even know where to begin.  This may have to happen in multiple posts. 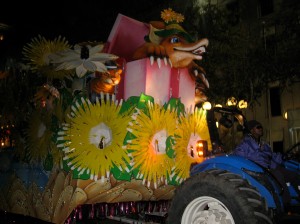 One of the floats in a Mardi Gras parade

For the past three months, I have kept myself occupied as a pedicab driver for Need A Ride, LLC – a physically exhausting, but rewarding occupation.  The hours have been long, especially during Mardi Gras, but now I am finally taking a few days off to recover.  This city can suck a person in, and it will be sad when I finally have to leave.  From crazy football fans to flash parades to great music and great food, New Orleans possesses a unique spirit which I have experienced in no other city.  Certainly no other city in North America could compare.  While the French influence reminds me of Montreal, the warmer weather, friendlier people, and lack of hills are just a few of the more superficial qualities that set New Orleans apart.

Aside from work, I have also been trying to train for the marathon, which is on March 4th (just a week away).  If anyone is in town that morning, it would be amazing to see y’all supporting us runners along the course.

While I have been pedicabbing, Phil has been working at St. Vincent’s Guest House.  He can tell you more about his work there, since, honestly, we haven’t seen each other very much since we arrived in New Orleans.  We also have some very important news that will change the course of our trip, but I will wait for Phil before breaking it out here.

One of the main reasons we are both bicycling around the world is to raise money for charity.  So, I think it is important to give you all a way to donate easily to the charities of our choice.  I ride in a bike tour every year for the MS Society, and, while I’m not sure I’m going to make it for the ride in Rhode Island this year, I am still raising money for the RI Chapter.  To donate directly to the cause, you can go to my personal fundraising page at http://main.nationalmssociety.org/goto/sarahthomas2012.  The bike tour is on June 16-17, and begins and ends in Newport, RI.  Even better than donating would be to sign up for the tour yourself!  There is still plenty of time to train…

Now, I will be spending the rest of the weekend celebrating my 28th birthday!

Posted on 25 February 2012, in New Orleans, The space between. Bookmark the permalink. Leave a comment.