← Day 32: Meridian to Laurel, MS
A few days in Hattiesburg → 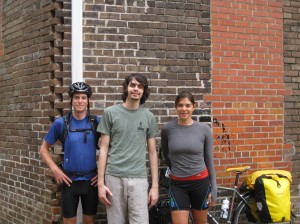 Phil, Dallas and me before leaving Laurel

I awoke this morning in such a dark room that I thought it was still the middle of the night.  It was after 10am.  We didn’t have to travel very far to get to Hattiesburg, so we weren’t in much of a hurry.  However, we had not heard from the couchsurfer in Hattiesburg who initially agreed to host us in over a week, and we didn’t have his address or phone number so we weren’t sure if he had gotten my message a few days ago saying that we were a day behind.  I sent out messages to a few other couchsurfers in Hattiesburg in case we couldn’t get in touch with him, and Dallas contacted a few of his friends in Hattiesburg.  Dallas made eggs and pancakes for us, despite not eating any himself.

We left Laurel even later than we left Meridian, but we had only half the distance to travel.  The course was flat, following highway 11 almost the entire way, but it was terribly windy.  The wind tried continuously to push us backwards, and we fought it every mile of the ride.  In the first ten miles we passed a dead badger on the side of the road, and shortly afterwards passed by a dead snake.  This brought the badger song into my head for nearly the rest of the ride, and I found myself actively on the lookout for mushrooms on the side of the road for the next few miles.  We made one stop at a fruit stand, which had a sad selection of old-looking citrus fruits and a few bad apples.  I spent less than a dollar on a small bag of pretzels and a Capri Sun. 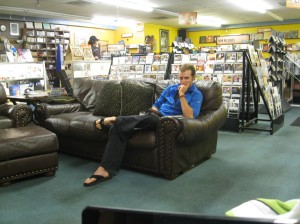 It had rained on and off on us during the ride, and by the time we arrived in Hattiesburg, it was steadily sprinkling.  Phil was craving Chinese food, so when I spotted Panda, we pulled into the parking lot so he could get some food.  As we pulled in, another cyclist rode up to greet us.  It was Mat – the couchsurfer who had agreed to host us when I had first contacted him a few weeks ago.  He was on his way to the Southern Mississippi football game, and when he saw the two of us in our touring gear, he figured we might be the couchsurfers he was supposed to host.  He gave us his phone number and we planned to meet up after the game.

While Phil was eating Chinese food, I continued a few blocks west and found a cafe where I could order salad, coffee, beer and a turtle dessert bar.  The turtle bar was SO good, I had to have seconds.  T-Bone’s cafe is also a record store, and they had pretty good music playing.  Phil joined me shortly after I sat down to eat and made himself comfortable in one of the couches to read his Kindle.

We heard from Mat around 6:45 and rode to his house.  His girlfriend, Shivan, was working at the football game and hadn’t come home yet.  Mat showed us around, and their numerous dogs and cats introduced themselves, begging for affection.  An artist who moved to New Orleans had lived in the house for years, and his drawings and sculptures were all over the house.  There were also several musical instruments, including a piano and a baritone, which I played a bit.  Shivan came home, and we ate some grapes and sushi and drank wine before heading to bed.

Posted on 27 November 2011, in Providence to New Orleans. Bookmark the permalink. Leave a comment.

← Day 32: Meridian to Laurel, MS
A few days in Hattiesburg →