Phil made breakfast in the morning, and baked an apple pie to bring to Crystal’s cousin’s house in Collinsville.  I ate a mixture of avocado, banana and cottage cheese and made some phone calls outside, where the sun was warm and phone reception was decent. 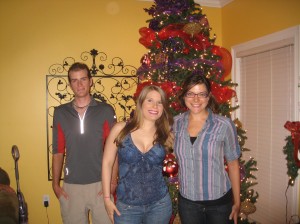 Phil, Crystal and me at Daphne's house for Thanksgiving

When the pie was out of the oven and Crystal was ready to go, we drove to her cousin Daphne’s house, about 15 minutes away.  At least 30 family members were in town from all over for the holiday.  I didn’t recognize a lot of the food, but it was all delicious.  I even enjoyed the deep-fried turkey.  There was cornbread stuffing, corn casserole, a baked bean/meat dish, ham, broccoli rice casserole, green beans disguised in a creamy dressing, and mashed potatoes.  Of course, the desserts are always my favorite, and I had to save room for the pies, puddings, and cake.  Aside from the desserts that Phil and I brought, there was pecan pie, a lemon layered pudding dessert with a pecan crust, yellow cake with chocolate frosting, and banana pudding.  Banana pudding is something I’ve seen almost everywhere since we reached Alabama, and it’s incredible.

After eating, the family dispersed – the kids played outside with the dog, some watched football, and most of them just talked.  Several hours later, after many people had gone home, the food was broken out again.  I had a second course of much of the same food, plus extra banana pudding.

Posted on 24 November 2011, in Bicycle Touring, Providence to New Orleans. Bookmark the permalink. Leave a comment.