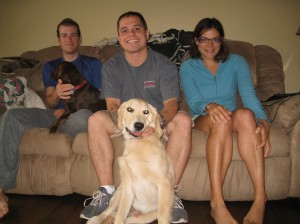 Phil, Bailey, Joe, Cooper and me

Joe had an exam on Monday morning and then was driving to be with his family in Memphis for Thanksgiving, but his roommate, Kenny,who was initially skeptical of couchsurfing, kindly agreed to let us stay another night after Joe was gone.  Joe also let us use his bed, which was a great improvement over the couches in the living room.

We spent most of the day relaxing and recovering from the 4 hard days of riding we had done since Atlanta.  It was just over a mile walk to Bama Jama’s, where we ate breakfast by the football stadium.  After walking back, Phil played video games while I napped with Kenny’s dog, Bailey.  I brought Bailey out for a walk and then went running myself through the University of Alabama campus and to the Tuscaloosa River Walk, just over 7 miles total.

View of the river during my run

While I was running, Kenny came back from work and went on his own 6-mile run, and afterwards, we all went grocery shopping.  Kenny made three pizzas for dinner, which were all delicious (especially the BBQ chicken pizza).  Kenny’s neighbor, Chris, and friend, Kari, joined us for dinner.

My good friend from RI, Ashley, has family in Tuscaloosa, and she had put me in touch with her cousin, Jon, who I was hoping to meet later that evening.  Unfortunately, he ended up not being able to meet that night.  Phil and I weren’t sure if we would leave the next day because of severe thunderstorms that were predicted for Tuesday, so we decided to wake up early the next morning to get a better idea of the weather.

Posted on 22 November 2011, in Bicycle Touring, Providence to New Orleans. Bookmark the permalink. Leave a comment.