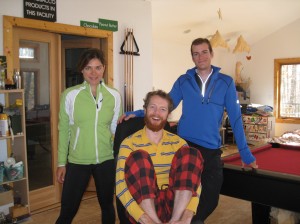 Me, Jesse and Phil before leaving Carrollton

Jesse stayed in the main house, and didn’t end up getting home from work until 5am.  I can’t imagine how difficult it must have been, but he still managed to wake up at 10 to bring us breakfast from the house.  I felt surprisingly fresh for having danced all night and gotten so little sleep.  My only complaint is that smoking was allowed in the bar after 10pm, and so all of the clothes I wore the night before stunk of cigarette smoke.

The ride was mainly downhill and the wind was generally behind us, but our average speed was slower than I had expected under those conditions.  We stopped at 23 miles for a quick snack, and then continued on to a vineyard where Jesse had recommended we stop.  Along the way, Garmin directed us down a short, nonexistent road that was thickly overgrown with young pine trees and thorny branches.  We struggled to push our bikes and ourselves through to the road up ahead.  Maybe that’s what slowed our average speed for the day.  Once on our bikes again, Phil brought to my attention that it was an hour earlier than I had thought, since we had crossed into another time zone at some point in the last hour.

Southern Oak Vineyards (aka White Oak Vineyards) is located in Anniston, Alabama, and gives free wine tastings.  We stopped in to sample all of their offerings and decided on the Scarlet red muscadine table wine to purchase for one of our lucky future hosts.  The wines were all delicious and mostly on the sweet side.  The owner recommended a restaurant for us to try when we got to Oxford.

When we got to Oxford, we went straight for the restaurant, but it was closed until 5pm.  It was going to get dark soon, and we still needed to find a place to set up our tent, so we went on down the road to seek out a patch of grass somewhere.  We ended up at the First United Methodist Church of Oxford.  The pastor, Chuck, initially told us that we couldn’t stay there because the church would be full of boy scouts that evening, but he agreed to let us pitch our tent on the grass by the church.  Almost as soon as we had finished setting up the tent, he came back outside to tell us that there was a scheduling confusion, and the boy scouts were actually coming next weekend, so we were welcome to stay inside if we wanted.  Since it was going to be in the 30’s overnight and we were already cold, we gladly accepted.  Chuck showed us inside to the youth recreation room, which was full of couches.  He is also a cyclist, and offered us any of his tools if we needed to fix anything on our bikes.

We went back to the restaurant that was recommended to us, but after looking at the menu decided it was too pricey (Chuck had warned us of this, but the reviews online did not seem so bad).  However, just the thought of all the other options around there made me think “heartburn”.  We decided to part ways for dinner and Phil went to Waffle House while I splurged at Garfrerick’s Cafe and enjoyed a heartburn-free meal of tuna ceviche, pan-seared fish and risotto, and cranberry-pear bread pudding for dessert.  Phil and I met up again after dinner and biked back to the church to get some rest.

Posted on 18 November 2011, in Bicycle Touring, Providence to New Orleans. Bookmark the permalink. Leave a comment.