← Day 8: Langhorne to Philadelphia (another windy day in PA)
Day 10: Elkton to Baltimore →

Breakfast with Lucia and Steve

Steve and Lucia treated us to an excellent breakfast at a famous Jewish Deli within walking distance of their house, where the portions were enormous.  Afterwards, we went back to pack up our bikes.  Steve and Lucia biked with us to a bike shop, s0 we could buy a spoke wrench, and then escorted us through the city, including the Italian market, and to the edge of town where we said goodbye.

While the wind wasn’t nearly as heavy as it had been the previous two days, it still did not blow in our favor.  To top it off, the terrain was hillier than it has been for the entire trip thus far.  About 25 miles out, Phil realized that his fleece had fallen off his back rack, where he had secured it with a bungee cord.  We ended up cycling a few miles past the Delaware state line sign (which proudly announces that you are entering the home of tax-free shopping) on a busy road to get to a mall, where he could buy a new one at EMS. 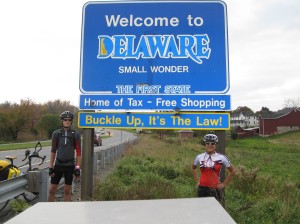 Our only other stop was at an orchard about 4 miles from the home where we were staying, drawn in again by the smell of donuts and apple pie.  We bought a pumpkin pie and some ice-cream to take to our hostess, Norma, as a gift.  Norma’s home is absolutely beautiful, and the plumbing in the bathroom adjacent to the room where we were to stay had been finished in the nick of time, just a half hour before our arrival that evening.  Norma cooked a lovely stew, and her boyfriend, Peter arrived with fresh bread.  Her neighbor, Darrell, joined us a bit later (arriving by golf cart) to hear about our trip.  Since we were so tired from the long ride, Phil and I excused ourselves around 10pm to go to bed (and here I am, just finishing this post).

Posted on 22 October 2011, in Bicycle Touring, Providence to New Orleans. Bookmark the permalink. Leave a comment.

← Day 8: Langhorne to Philadelphia (another windy day in PA)
Day 10: Elkton to Baltimore →