This was such a beautiful day.  Dallas and I enjoyed sunshine and comfortable temperatures all day, with gorgeous views of Oregon’s coastline along much of the ride.  The first half, from Gold Beach to Brookings, was awfully hilly and included some of the longest climbs of our tour so far.  The descents were rewarding but were over too quickly.  I felt like much of the first 30 miles was spent climbing hills at a pace of around 5 miles per hour. 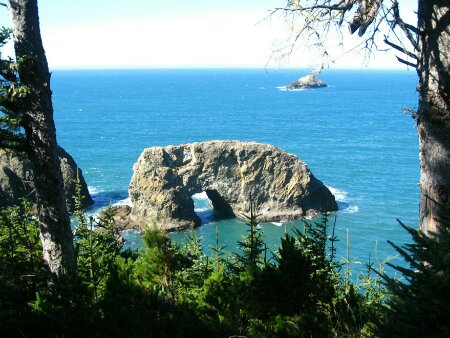 Brookings is the southernmost town in Oregon, and Dallas and I spent a little too much time there.  Since all the hills slowed us down, we got there a bit later than anticipated and didn’t actually get our daily dose of espresso until after 2pm.  This coffee shop we found was nestled by a harbour, with several docks and a cluster of little food places right off the road.  In between coffee and pizza, we spoke with Jeremy, who was staying with his girlfriend on their sailboat.  Like us, he had quit his job for a more adventurous and fulfilling life of seasonal jobs with plenty of vacationing in between seasons.  Hopefully we will run into him and his girlfriend again down the road.

We ordered a pizza with salad on it from the nearby pizza place, and then moved on to the place next door for ice-cream cones before hitting the road again.  It was after 4pm when we finally left Brookings, and it was another 30 miles to Crescent City.  We finally made it to California!  So far, I think Oregon is more beautiful, but our route took us inland a bit once we crossed the state border.  More coastline and redwood forests await us tomorrow, so I’m sure California will redeem itself.

Dallas and I had hoped to make it a few miles past Crescent City and into Del Norte Coast Redwoods State Park to set up camp, but the sun was setting as we stopped at the grocery store, and Dallas had remembered climbing a steep hill with no shoulder to get out of Crescent City.  We didn’t want to deal with that in the dark, so we’re staying in town tonight and will try to get an early start in the morning to make up for it.