← A few months away from rainy Portland
Northbound, for Alaska →

I write this post with both sadness and hopefulness.

On our last day in New Orleans last year (in May of 2012) we celebrated by going out to a bar.  Our bikes were just outside and a few doors down.  When I went to check on them, I noticed someone standing over them.  As I approached him, I realized the man was attempting to steal our bikes by twisting a broom handle that he had stuck in between the cable lock and the bike frames.  I confronted the man, who looked both drunk and homeless.

“What are you doing with our bikes?”

“These bikes? These aren’t your bikes.” He lied.

“Ummm…yes. That’s my bike, and that’s my helmet!” I retorted, pointing at the helmet that he was wearing backwards on his grimy head of long, tangled grey hair.

He finally decided against messing with me any further and stumbled away.

Having my bike stolen was one of my biggest fears about living in New Orleans.  We made it until our last night without incidence, and I was lucky enough to divert the one feeble attempt that was made to take our bikes from us.  Unfortunately, it was in Portland that our bicycles were successfully stolen.  Unless of course, our bikes had overheard Dallas considering buying a new bike and decided to run away together before I got the same idea.  I can only hope they are together and being treated respectfully, wherever they are, and that they are not too afraid. 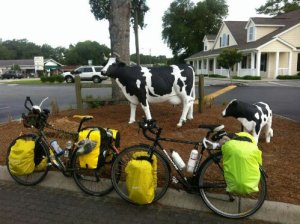 We were on our way back home from visiting Dallas’s mom in Oregon City, and stopped at REI.  Our bikes were locked up together on the bike rack outside of REI, and we left them alone for maybe an hour, while we browsed the store and ate a quick meal next door.  Walking back to the bike rack, I did not see any wheels sticking out.  That’s when my heart sank in my chest, and we saw the cleanly cut lock on the ground by the rack.  Fortunately, Portland does have good public transportation, and we were able to get home within 40 minutes and only one connection from the MAX to a bus.  But I felt a bit of shamefulness having to walk to the MAX in our bike shoes, helmet in hand, with no bikes.  I started thinking of all the things that I could have done differently to prevent our bikes from being stolen, and I felt as if it were my fault.  We shouldn’t have stopped at REI.  We should have taken the ride that Dallas’s step-father had offered us back home.  We should have locked our bikes somewhere else, or gone back to check on them between shopping and eating.  But in reality, there’s no way I could have known, and of course it’s too late to change what has happened.

Dallas and I are looking on craigslist, ebay, pawn shops and bike shops in hopes of recovering our lost bicycles.  But in the end, we cannot complete our goals without bikes, and we may just have to break down and get new ones.  This gives us an opportunity for something good to come out of it, and perhaps we can strike up a partnership with a bicycle company that would be interested in sponsoring us.  We are totally open to ideas.  In our current circumstance, we will probably end up riding whatever we can find on a budget.

← A few months away from rainy Portland
Northbound, for Alaska →